DIGOS CITY –  A magnitude 4.3 earthquake 15 kilometers northwest of Malungon, Sarangani struck at dawn on Sunday and alarmed, among others, Catholics attending the Misa de gallo (simbang Gabi) novena mass in various churches in the area.

The latest earthquake to rattle Mindanao was recorded at 5:26a.m. 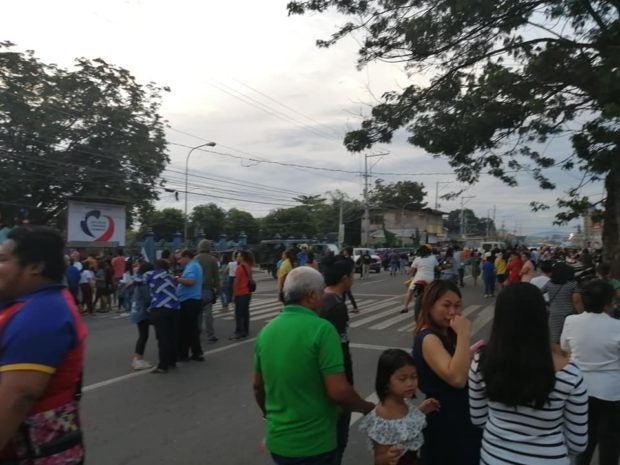 Churchgoers at the Mary Mediatrix Cathedral in Digos City rush toward Rizal Avenue after a magnitude 4.3 earthquake struck during the dawn mass.  (ORLANDO DINOY /Inquirer Mindanao)

Rosita Pantonial, 46, felt the ground shake shortly after the dawn mass ended as other churchgoers rushed out of the church compound.

Ritchie Amisola, 32, another churchgoer at dawn mass here, said he is having sleepless nights since Saturday night because of the aftershocks in his neighborhood in Barangay San Jose.

The Philippine Institute of Volcanology and Seismology (Phivolcs) said the quake had a depth of focus of 34 kilometers and was tectonic in origin.

Instrumental intensities were also recorded in the following towns in Sarangani: Intensity V in Malungon; Intensity IV in Tupi; Intensity III in Alabel, and; Intensity II in Kiamba.

At 3:15 a.m., a magnitude 3.5 earthquake was also recorded at 19 kilometers northwest of Malungon town. Only instrumental intensities were recorded from this milder earthquake which had a depth of 30 km.

No damage and aftershocks are expected from both earthquakes.

The quake was tectonic in origin and had a depth of focus of 1 kilometer.

Geologists are looking at two parallel faults as the probable cause of the 6.9 magnitude quake on December 15.

One of them, the Tangbulan Fault stretches 69 kilometers from Bansalan town to Sta. Maria in Davao Occidental.

This fault runs 10 kilometers to the east and parallel to the 65-kilometer Makilala-Malungon Fault that stretches from Makilala to Malungon, Sarangani.

Phivolcs advised the public to watch out for the possibility of more aftershocks.