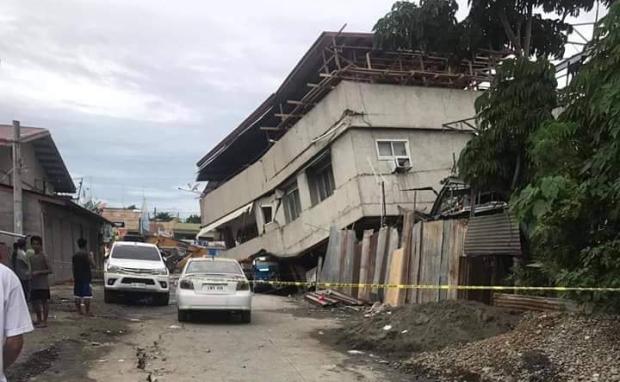 At first, relatives of the two missing women thought they were among those trapped in the collapsed Southern Trade building in the vicinity of the Padada public market in Davao del Sur. But as it turned out, the women went to another town. (Photo by DREMA F. QUITAYEN)

DIGOS CITY, Davao del Sur, Philippines — A woman and her daughter earlier reported as missing after a magnitude 6.9 quake rocked the province have been found unhurt.

Authorities were alarmed when Maricel Dio, a resident of Barangay Buguis in Sulop, Davao del Sur, went to the Padada Municipal Police Station on Dec. 18 and reported that her relative, Brenda Rabor Dio, 47, and daughter Honeybee Rabor Dio, 17, failed to go home after the earthquake struck at 2:11 p.m. on Dec. 15.

Maricel told Capt. Arnold Absin, Padada police chief, that Brenda and Honeybee were selling copra in Padada, an adjacent town of Sulop, before they went missing after the temblor.

Speculations arose that the mother and child were among those trapped inside the thre-story South Green Trading building that collapsed during the quake.

At that time, authorities had already called off the search-and-rescue after life detectors no longer got indications of anyone alive in the rubble.

It later turned out that the two women went to Malalag, also in Davao del Sur.

Federico Daligdig, Brenda’s brother-in-law. reported to Padada police that the two were alive and unhurt.