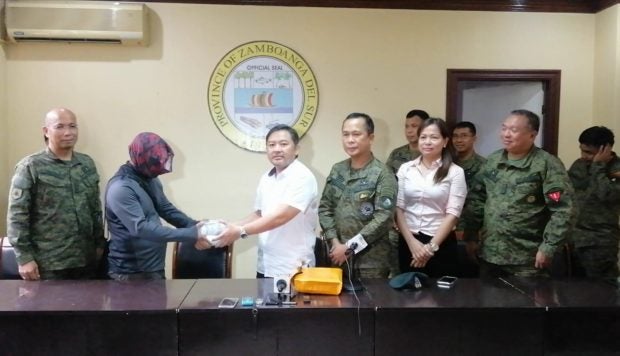 British Allan Hyrons and partner, Wilma, a Filipino, were abducted in Tukuran, Zamboanga del Sur on October 4. They were then brought to Sulu where they were rescued in a military operation on November 25 along the borders of Silangkan and Taha villages in Parang town.

The handover of the reward money happened inside the conference room of the Provincial Governor’s Office after which Yu, Western Mindanao Command chief Lt. Gen. Cirilito Sobejana, and other military and police officials held a press conference.

The P2 million cash reward came from the provincial government.

Yu commended the military for the successful rescue of the Hyrons couple. Sobejana, meanwhile, lauded Yu’s hands-on handling of the crisis.

Sobejana disclosed that the kidnapping’s mastermind, Sibih Pisih, was killed during the encounter that led to the couple’s rescue.

But some of the Abu Sayyaf members in his ring still maintained contacts in the Zamboanga Peninsula and are now the subject of a manhunt, Sobejana said.

Sobejana noted that the informant risked his life in helping the military and police rescue the Hyrons couple.

He related that the military’s operating troops encountered three battles before they finally rescued the couple.

Sobejana explained that the military troops were able to confine the lawless group in one corner.

As the guide was familiar with the area and its terrain, he was able to give the authorities the needed information that led to the couple’s freedom from the bandits’ hands.