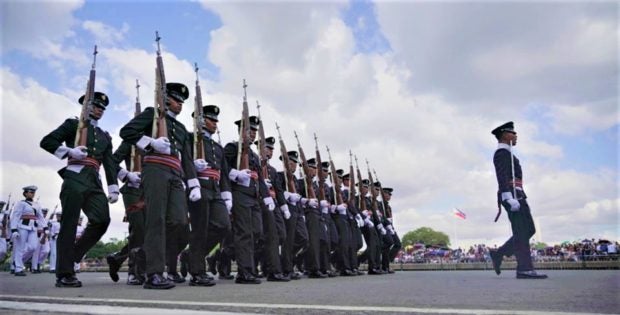 Cadets training to be soldiers conduct the silent military drill during the 1st Presidential Silent Drill Competition at the Quirino Grandstand on Friday, December 20, 2019. Photo by PCOO

MANILA, Philippines — The Armed Forces of the Philippines (AFP) on Saturday said it will stage daily military drills, heeding the order of President Rodrigo Duterte, who got inspiration from China.

“We will comply with the directive of the President and Commander in Chief to have regular silent drill performances. We will determine the details,” AFP spokesperson Brig. Gen. Edgard Arevalo said in a statement.

At the closing ceremony of the 1st Presidential Silent Drill Competition at the Quirino Grandstand on Friday, December 20, Duterte ordered the AFP to perform daily military drills to honor the country’s national hero, Jose Rizal.

The President said he was inspired by what he had observed in one of his visits to China, where there is a drill during sundown and before the flag is lowered.

Duterte said the daily drills should be “spearheaded by the Armed Forces of the Philippines and those who’d like to participate.”

Six of the seven contending teams during the 1st Presidential Silent Drill Competition were comprised of academy cadets and students of officer candidate schools.

Because they are all training to become members of the AFP, Arevalo said the daily silent drill performances could be conducted on a regular rotation basis.

Friday’s event was aimed to support the comeback of the mandatory Reserve Officers’ Training Corps program.