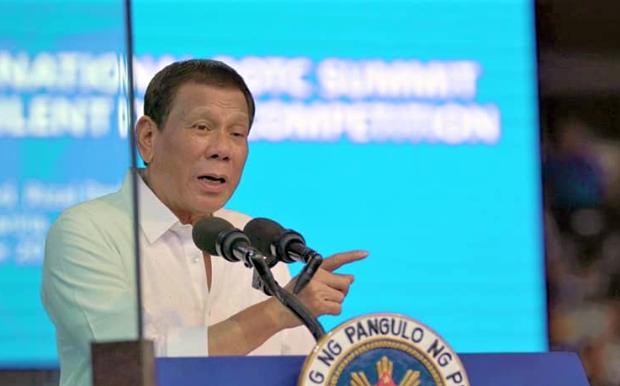 MANILA, Philippines — President Rodrigo Duterte on Friday asked Filipino youth not to be swayed by the communist rebels’ ideology which he called “barat” — that is, stingy.

“You young people, don’t be swayed by this stingy ideology,” Duterte said in Filipino during the closing ceremony of the 1st Presidential Silent Drill Summit at the Quirino Grandstand in Manila.

“We went through that. I was one of those. But later on, I realized that nothing else would be good except to have law and order and one government,” he added.

The President likewise underscored the importance of having a reliable military reserve force could be mobilized in case of war.

The Silent Drill Competition, a brainchild of Duterte, is meant to rally support for the revival of the mandatory Reserve Officers’ Training Corps (ROTC) program.

Duterte has been pushing for the revival of the mandatory ROTC program, which he said would instill patriotism and discipline to young Filipinos.

Speaking before cadets and their families, the President explained that the competition stemmed from a drill he witnessed during a flag-lowering ceremony in a visit to China.

He then asked the military to perform silent drills in front of the statue of national hero Jose Rizal in Manila every day.

“I want you to go to a sort of an act to honor Rizal and our country. Do it. And I order it every day,” he said.