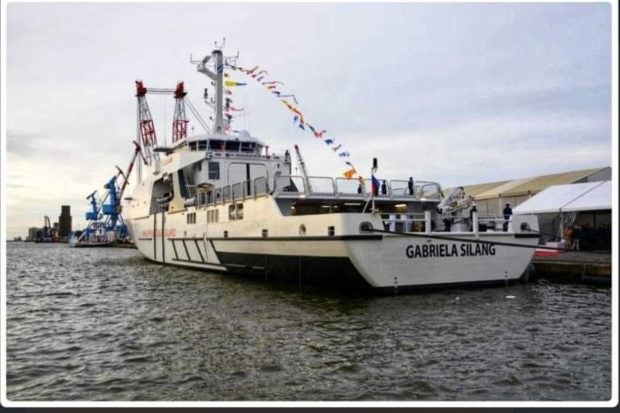 The Philippine flag was raised for the first time on the future BRP Gabriela Silang, as OCEA shipyard formally hands over the ship to the Philippine Coast Guard. / PHILIPPINE COAST GUARD

The Philippine flag was raised for the first time on the future BRP Gabriela Silang, the PCG’s biggest and most modern ship yet, during the handover ceremony at the OCEA shipyard in Saint Nazaire, France, on Thursday.

Also present at the ceremony were the 35 PCG personnel and crew who will man and operate the vessel and will bring it home to the Philippines.

Balilo said the ship will depart France on December 30 and is scheduled to arrive in Manila on February 10. It is expected to enter the service within the same month.

The 83-meter ship is designed to conduct a general coastal patrol of territorial waters, law enforcement, and maritime surveillance operations.

The vessel will be used to patrol the West Philippine Sea and Benham Rise, and conduct anti-piracy and terrorism missions in Mindanao.

The Philippines and OCEA signed the contract for the offshore patrol vessel worth P5.6 billion in 2014. PCG earlier received four fast patrol boats as part of the project.