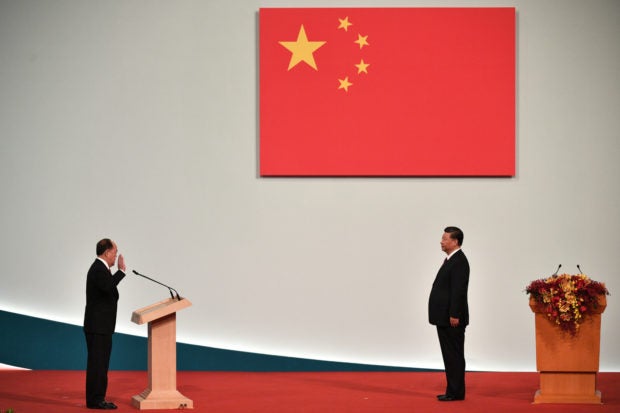 Macau’s incoming chief executive Ho Iat-seng (L) takes his oath in front of China’s President Xi Jinping during an inauguration ceremony as part of 20th-anniversary handover celebrations, in Macau on December 20, 2019. – Macau on December 20 marks 20 years since the former colony was returned to China with a celebration led by President Xi Jinping touting the success of the pliant gambling hub while Hong Kong boils. (Photo by Philip FONG / AFP)

MACAU — Macau on Friday celebrated 20 years since the former Portuguese colony was returned to China with President Xi Jinping praising the pliant gambling hub for its patriotism, a stark contrast to protest-ravaged Hong Kong.

The day’s festivities centered around the inauguration of a new leader for a city that Xi described as a “shining chapter” of its “one country, two systems” model.

Ho Iat-seng, a former member of China’s top lawmaking body, won a one-horse race this summer to become Macau’s new chief executive – a position that is chosen by a 400-member committee stacked with Beijing loyalists.

Throughout his three-day visit, Xi has seized on Macau’s comparative political calm, a theme he continued in Friday’s landmark speech as he presided over Ho’s swearing-in ceremony.

“A sense of nation and patriotic spirit has deeply taken root in the hearts of young people,” Xi told delegates, adding that loyalty towards Beijing was the “most important reason” for Macau’s success.

He also used his address to warn against any foreign powers taking a stance on Hong Kong, which has been convulsed by six months of huge and increasingly violent protests against Beijing’s rule.

“We will definitely not allow any foreign forces to interfere with Hong Kong and Macau affairs,” he said to applause from delegates.

Both Hong Kong and Macau are run on Beijing’s “one country, two systems” model that allows them to retain certain liberties such as an independent judiciary, a free market, and separate currency.

But while Hong Kong seethes with popular resentment towards Beijing, Macau has become steadily more like the mainland.

The city has witnessed little of the dissent and has become hugely wealthy thanks to being the only place in China where gambling is allowed – although Xi omitted any reference to the gaming industry during his visit.

Half the 700,000 strong population come from the mainland and multiple Hong Kong journalists were denied entry in the run-up to this week’s anniversary celebrations.

China’s leadership has used Macau’s handover anniversary to showcase the benefits of deference to authoritarian rule, a pointed signal to those protesting across the Pearl River Delta in Hong Kong.

“Macau and the motherland are intertwined and destined to develop as one,” he said in his inauguration speech.

Xi also singled out mainland style anti-sedition laws in Macau that have been bitterly opposed for years in Hong Kong.

In the last two decades, Macau’s skyline and economy have changed beyond recognition with glittering casinos raking in each week what Las Vegas collects in a month.

Its GDP has soared from $6.4 billion in 1999 to more than $55 billion while per capita GDP is the third highest in the world behind Luxembourg and Switzerland, according to the International Monetary Fund.

But there is a huge rich-poor divide and almost all its economic chips remain in the gambling basket.

The local government has tried to diversify away from gambling, promoting Macau as tourism and culinary destination, something Xi called on officials to continue doing.

There had been speculation China’s leader might unveil a series of economic measures rewarding Macau for its loyalty but none were announced in his speech.

Among those to attend the inauguration was Hong Kong leader Carrie Lam, who currently boasts record-low approval ratings but retains the backing of Beijing.

When Xi made a visit to Hong Kong in 2017 for the city’s own handover celebrations, he delivered a tough speech warning that any challenges to the authority of the central government were a “red line and absolutely impermissible”.