MANILA, Philippines – The reimposition of capital punishment or death penalty should be given serious thought for crimes of an “unimaginable level of brutality and inhumanity, as in the Maguindanao massacre,” Senator Imee Marcos said Friday after the court handed down its verdict on the brutal 2009 Maguindanao massacre that took the lives of 58 people, including 32 mediamen.

This was a complete turnaround from Marcos’ previous stand on the revival of the death penalty, which she opposed when she was still a member of the House of Representatives. 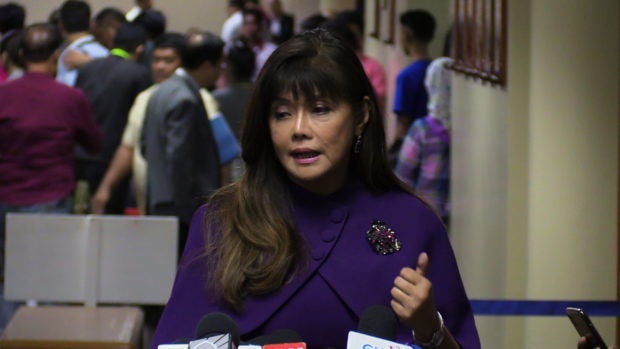 “The scope of the Revised Penal Code at present does not fathom the horror suffered by the relatives of the brutally murdered victims, especially of the Mangudadatu family and the orphaned children of scores of journalists,” Marcos said.

Marcos noted that times have changed and the reimposition of the death penalty may now be justified.

“But the law is an organic, living thing that must respond to our extraordinary times,” she explained.

If the death penalty is revived, Marcos said its application should be limited to “very exceptional exceptions” like large-scale drug trafficking and plunder.

Of the 101 accused in the Maguindanao massacre case who underwent trial, 28 were convicted including eight members of the influential Ampatuan clan.

They were convicted of 57 counts of murder and sentenced to 40 years in prison without parole.

Fifteen, meanwhile, were sentenced to six to 10 years imprisonment for being accessories to the crime.