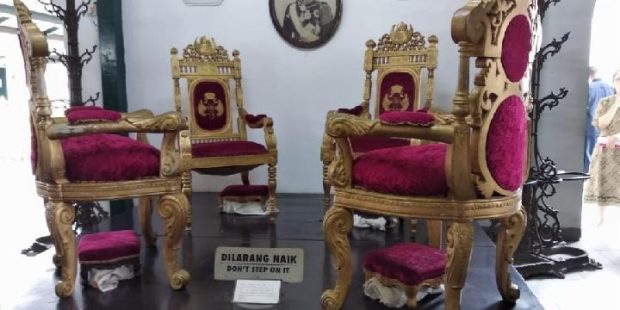 An antique three-legged table, which is part of the museum’s collection and was displayed on a small plywood stage at the time of the incident, was once used by sultan Hamengkubuwono VIII, who reigned between 1921 and 1939. Tempo /Pribadi Wicaksono via The Jakarta Post/Asia News Network

JAKARTA — A local tourist knocked over and broke an 80-year-old wooden table at the Yogyakarta Palace museum during an attempt at a selfie on Monday.

The antique three-legged table, which is part of the museum’s collection and was displayed on a small plywood stage, was once used by sultan Hamengkubuwono VIII, who reigned between 1921 and 1939.

After the 40-year-old female tourist, reportedly from Bandung, West Java, recklessly climbed the stage to take a selfie, the base of the stage fell down and one of the table’s legs broke, according to museum attendant Bekel Purakso Wiarjo, who witnessed the incident.

“The tourist came at about 12 noon,” he added as quoted by tempo.co.

A clear sign prohibiting visitors from climbing the display area was already displayed on the stage.

The table is part of a set of well-preserved gilded furniture consisting of four chairs and a table adorned with carvings and red velvet cushions.

Bekel said no attendant was near the area at the time of the incident.

Reportedly, the visitor, when confronted by museum management, said that someone had allowed her to take a selfie on the stage.