Protests of Indian law grow despite efforts to contain them 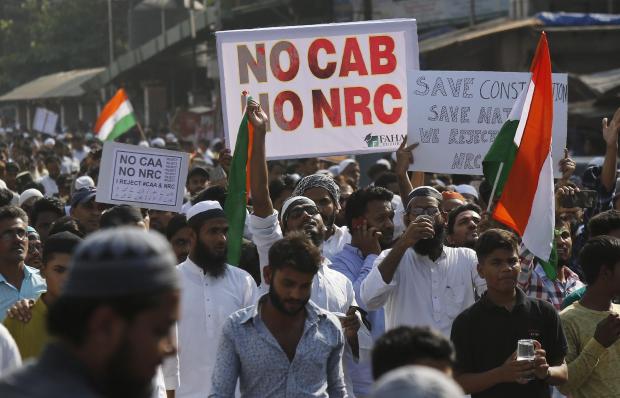 Indians march during a protest against the Citizenship Act in Mumbai, India, Wednesday, Dec. 18, 2019. India’s Supreme Court on Wednesday postponed hearing pleas challenging the constitutionality of the new citizenship law that has sparked opposition and massive protests across the country. (Photo by RAJANISH KAKADE / AP)

NEW DELHI — From campuses along India’s Himalayan northern border to its southern Malabar Coast, a student-led protest movement against a new law that grants citizenship on the basis of religion spread nationwide on Wednesday despite efforts by the government to contain it.

The law provides a path to citizenship for Hindus, Buddhists, Christians and other religious minorities who are in India illegally but can demonstrate religious persecution in Muslim-majority Bangladesh, Pakistan and Afghanistan. It does not apply to Muslims.

Modi has defended it as a humanitarian gesture, but on Wednesday, authorities tightened restrictions on protesters, expanding a block on the internet and a curfew in Assam, where protests since the law’s passage a week ago have disrupted life in Gauhati, the state capital.

They also restricted assembly in a Muslim neighborhood in New Delhi where demonstrators on Tuesday burned a police booth and several vehicles.

After India’s Supreme Court postponed hearing challenges to the law Wednesday, huge demonstrations erupted in Gauhati, in Chennai, in the southern state of Tamil Nadu, and in Mumbai, India’s financial capital. Protesters also rallied in Srinagar, the main city in disputed Kashmir and in the tourist mecca of Jaipur in the desert state of Rajasthan, and threw stones at buses in Kochi, the capital of the southernmost state of Kerala.

Hundreds chanted slogans outside New Delhi’s Jamia Millia Islamia University. Widely disseminated images of police charging unarmed students with sticks and tear gas at a protest at the school on Sunday supercharged opposition to the law.

Critics say the Citizenship Amendment Act is the most overt example yet of discrimination against India’s Muslims in a string of actions taken by Modi since his party’s landslide reelection victory in May.

It follows a contentious registration process in northeastern Assam state intended to weed out people who entered the country illegally known as the National Register of Citizens, or NRC.

Nearly two million people in Assam were excluded from the list, about half Hindu and half Muslim, and have been asked to prove their citizenship or else be considered foreign.

India is building a detention center for some of the tens of thousands of people the courts are expected to ultimately determine have entered illegally. Modi’s home minister, Amit Shah, has pledged to roll out the system nationwide.

Some fear the NRC will be used by Hindu nationalists to detain or deport millions of Muslims. The newly passed law provides a loophole for people of other faiths.

The law also comes as an unprecedented crackdown continues in Kashmir, India’s only Muslim-majority region, after it was stripped of special constitutional protections and its statehood in August. Since then, movement and communications have been restricted there.

Experts say conditions for India’s Muslims have been growing worse under Modi’s Hindu-nationalist Bharatiya Janata Party, which came to power in 2014.