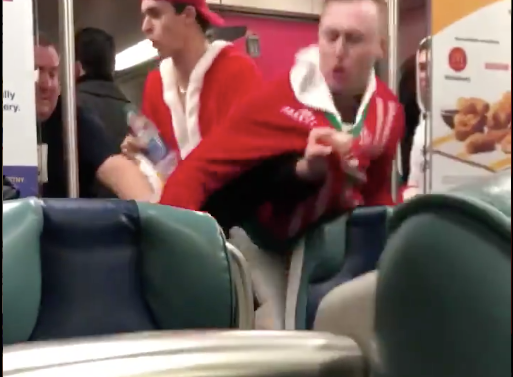 A group of men dressed as Santa Claus tries to subdue a stabbing suspect on a New York train. Image: screenshot from Twitter.com/kayla_jaclyn

A group of men dressed as Santa Claus banded together to subdue a stabbing suspect who attacked someone he was arguing with on a New York train.

A group of “Santas” participating in the annual SantaCon witnessed the altercation and tried to restrain the suspect.

A short clip of the scuffle was taken by a certain witness, Twitter user @kayla_jaclyn, who posted the video the day after, Dec. 15.

‘Tis the season on the @LIRR,” she joked.

tis the season on the @LIRR pic.twitter.com/Z3Ysn8mPcy

The witness, meanwhile, claimed that the stabbing suspect started the fight with the Santas.

“Just so everyone’s clear the guys in the santa costumes did not start this. the old drunk man enticing them did,” she said in a separate tweet.

When the train reached the next station, Woodside, the 22-year-old stabbing victim, was taken to the hospital with minor injuries, officials said. The suspect, on the other hand, was arrested by police.

The stabbing and the brawl was not SantaCon-related, MTA officials clarified, according to the news outlet.

SantaCon is “a charitable, non-commercial, non-political, nonsensical Santa Claus convention that happens once a year to spread absurdist joy,” as per its website.  Ian Biong /ra