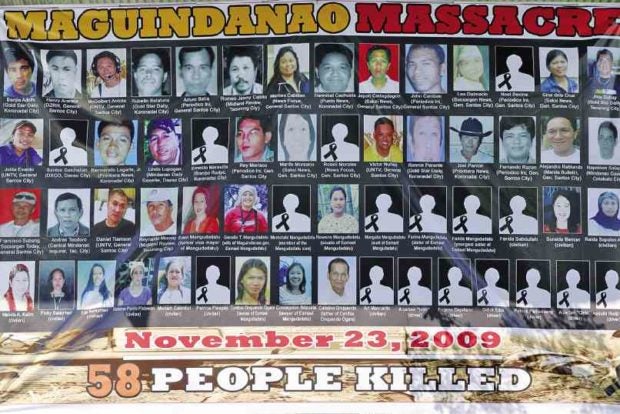 A TARPAULIN with the pictures of the 58 victims of the 2009 Maguindanao massacre hangs at the site of the mass murder in the town of Ampatuan, Maguindanao province. JEOFFREY MAITEM / INQUIRER MINDANAO

MANILA, Philippines–After almost 10 years of waiting, justice will finally ring for the 58 victims of the Maguindanao massacre, as Quezon City Judge Jocelyn Solis-Reyes hands down on Thursday her verdict in the case considered to be one of the world’s worst mass murder of journalists.

Here is a rundown of the events leading to Thursday’s promulgation:

Datu Andal “Unsay” Ampatuan Jr. informed then Vice-Mayor of Ampatuan town Rasul Sangki that armed men will be deployed in his area.

Sangki said Unsay called for a meeting in a hut at crossing Saniag, national highway where he was instructed  to secure the detachment fronting the Municipal Hall of Ampatuan, Maguindanao “in case something happens.”

2 am – The armed men led by Mogira Hadji Anggulat (Andal Sr’s weapons custodian) left the house of Andal Sr. and walked towards the highway of Barangay Matagabon to establish a checkpoint. In the area, several vehicles including a “Sangguko” or an armored vehicle are waiting.
5 am – Datu Unsay arrived in the area.
10 am – The armed men flagged down the Mangudadatu convoy consisting of 58 people 32 of which are journalists. They were brought to Barangay Salman, Ampatuan, Maguindanao where they were all killed.
11 am – Cpl. Zaldy Raymundo of the Philippine Army said a convoy passed their detachment. The convoy reached the top of the mountain in Barangay Salman. After around 10 minutes, simultaneous gunshots were heard. While gunshots were being fired, a backhoe was on its way to the gunshots.
1:30 pm, members of the 64th Infantry Battalion went to Barangay Salman, saw the backhoe and dead bodies–13 women and 8 men.
Around 3 pm, government troops found more mutilated bodies bearing multiple gunshot wounds. All in all 57 corpses were recovered. 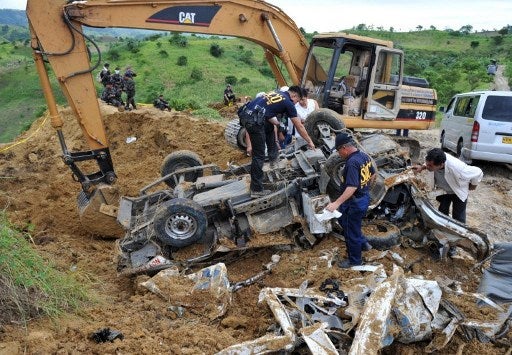 Police investigators look for evidence at the crime scene where victims of the Maguindanao massacre were buried in 2009. AFP file

Datu Andal Ampatuan Jr. was arrested and presented for inquest proceeding. The military had established that of the 57 bodies recovered, 30 were journalists.

A total of 25 counts of murder had been filed against Ampatuan Jr. before the Cotabato Regional Trial Court (RTC).

Authorities seize huge cache of firearms at the house of Ampatuan Sr.

Through Proclamation 1959, President Gloria Macapagal-Arroyo declared a state of martial law in Maguindanao.

The Supreme Court granted the request of the DOJ to transfer the murder cases from Cotabato to the Quezon City RTC.

DOJ filed a complaint for rebellion against seven members of the Ampatuan clan.

Multiple murder charges were filed against 100 other suspects most of which are part of the Civilian Volunteer Organization (CVO).

Andal Ampatuan Jr. pleaded not guilty to the death of over 50 individuals most of which are journalists.

Ampatuan Vice Mayor Rasul Sangki testified before the court and tagged Ampatuan Jr. in the murder of 58 people.

Mangudadatu testified that Palace officials dissuaded him from running for the gubernatorial race against Ampatuan Jr., who was known for being violent.

Additional murder raps were filed against Ampatuan Jr. He pleaded “not guilty” to all the cases.

Lawyers of Ampatuan Jr. sought the inhibition of Judge Jocelyn Solis-Reyes. On the same day, the panel of prosecutors amended murder information to include 56 more cases against Ampatuan Jr., his father Ampatuan Sr. and 195 others.

The Quezon City court ordered the arrest of more than 190 accused.

The rebellion case against the Ampatuans were dismissed, citing lack of evidence.

Ampatuan Jr. was transferred to the BJMP detention cell in Camp Bagong Diwa.

Acting DOJ Secretary Alberto Agra announced that Zaldy and Akmad Ampatuan would be removed from the list of the accused. His decision led to the protest of the panel of prosecutors that was tasked to handle the case.

Eyewitness Suwaib Upham was killed by an unidentified gunman in Parang, Maguindanao.

Former househelp of Ampatuan Sr., Lakmudin Saliao linked Ampatuan Jr. to the massacre who said he was merely following the orders of his father.

A member of the prosecution panel, Senior State Prosecutor Leo Dacera died of a heart attack.

The Court of Appeals denied the bid of Zaldy Ampatuan to reverse the DOJ ruling. He stays as accused in the case.

Ampatuan Sr. was arraigned. He pleaded not guilty to the mass murder.

The Court of Appeals denied Ampatuan Sr.’s bid to be excluded from the case.

The country marked the second year of the Maguindanao massacre with relatives of the victims urging the court to fast-track the case.

Police Corporal Hernanie Decipulo, one of the accused who was allowed to post bail committed suicide by jumping from the fourth floor of the Quezon City Jail Annex

Ampatuan Sr. was rushed to the hospital for vomiting blood. He was confined for two weeks.

Atty. Nena Santos, a private prosecutor confirmed that Esmail Amil Enog had been murdered. Enog testified in 2010 that he drove 36 armed men by batches to the massacre site. He disappeared in March.

Santos said months after his disappearance, his mutilated body had been discovered.

The DOJ filed a murder complaint before the Quezon City Court for the 58th victim of the massacre, photojournalist Reynaldo Momay. His body was never found but his identification card and dentures were recovered at the mass grave.

The Supreme Court reversed its ruling allowing live media coverage of the trial, taking into consideration the argument raised by the Ampatuans that it will violate their right to due process.

Zaldy Ampatuan was arraigned for 58 counts of murder. He pleaded not guilty to all charges.

Former Shariff Aguak Mayor Anwar Ampatuan pleaded not guilty to 58 counts of murder. He is the fourth Ampatuan to be arraigned.

The Supreme Court issued guidelines to speed up the proceedings of the trial.

In a resolution, instead of direct testimonies, the high court required both the prosecution and defense to submit judicial affidavits of their witnesses at least 10 days before the scheduled date of testimony.

The prosecution rested its case against the 28 suspects.

Atty. Sigfrid Fortun of the Fortun, Narvasa, Salazar Law Firm, Atty. Andres Manuel of the Manuel Law Office and Attys. Paris Real, Emmanuel Brotarlo and Sherwin Real of the Real Brotarlo and Real Law office informed the QCRTC Branch 221 withdrew as counsels to some of the accused.

The Quezon City Court allowed police officers to post bail. The police officers were members of the 1508th Provincial Mobile Group (PMG) and were stationed at the Malating checkpoint.

QC RTC Judge Jocelyn Solis-Reyes has granted the bail bid of Sajid Islam Ampatuan for his temporary liberty. He is the brother of Andal Jr. and Zaldy.

After two months of confinement at the National Kidney and Transplant Institute, Andal Ampatuan Sr. passed away.

The QCRTC denied the bail bid of Zaldy Ampatuan.

The defense started its presentation of evidence.

The trial court also resolved all the 12 sets of Formal Offer of Evidence (FOE) in connection with the bail applications of 69 accused.

The Court of Appeals upheld the decision of the QCRTC allowing Sajid Ampatuan to post bail.

The CA affirmed the decision of the Office of the Ombudsman dismissing former ARMM Gov. Zaldy Ampatuan from service following a lifestyle check that found him with unexplained wealth and under-declared assets amounting to P70.67 million from 2000 to 2009.

The proceedings were being actively attended by 10 lawyers that comprised the third Panel of Public Prosecutors, eight private prosecutors, and 23 defense lawyers/firms while the transcripts of stenographic notes have now reached 59 volumes, while the records of the cases are 129 volumes thick, plus 10 volumes of prosecution’s evidence.

The Court of Appeals affirmed the decision of the QCRTC to allow police officers from PMG to post bail.

The Court of Appeals affirmed the QCRTC’s decision refusing Zaldy Ampatuan’s bid to post bail for his temporary liberty.

The Court of Appeals upheld its decision in May 2015 that Police Lieutenant Rex Ariel Diongon, Patrolman Rainier Ebus, and Mohammad Sangki cannot be admitted as a state witness.

The QCRTC allowed Zaldy Ampatuan to attend his daughter’s wedding.

Sajid Ampatuan was elected as mayor of Shariff Saydona Mustapha.

The QCRTC has wrapped up the trial on the Maguindanao massacre case.

The court officially submitted the case for resolution.

Zaldy Ampatuan was taken to the hospital after suffering a stroke.

The QCRTC set the promulgation of the case on Dec. 19.