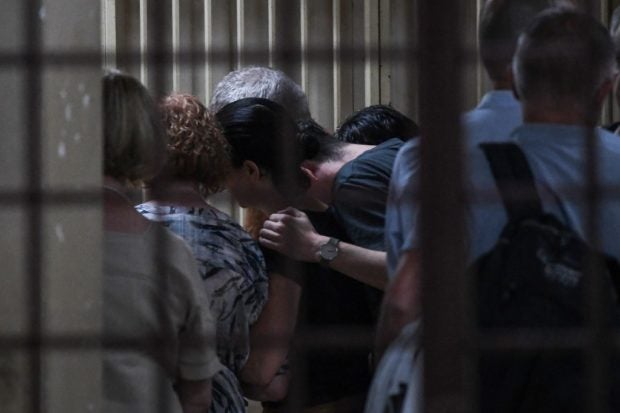 Family members arrive at a hospital where rescuers brought a body during a search operation for the missing 15-year-old Franco-Irish teenager Nora Quoirin in Seremban on August 13, 2019. Quoirin, who disappeared from a Malaysian resort, was found in a jungle ravine after a 10-day search involving a massive team. AFP

DUBLIN, Ireland — The parents of a Franco-Irish teenager whose body was found in the Malaysian jungle said they believe there was a “criminal element” to her disappearance, which police classified as a missing-person case.

The unclothed body of 15-year-old Nora Quoirin was discovered in August after a 10-day hunt through dense rainforest, in a ravine about 2.5 kilometres (1.5 miles) from the resort where she had been staying.

Meabh and Sebastian Quoirin told Irish broadcaster RTE they could not imagine that Nora, who had learning difficulties, would have been able to wander that far.

“For us something very complex happened. We have insisted from the beginning that we believe there was a criminal element to what happened,” they said in an interview published Wednesday.

The results of an autopsy found Nora likely starved and died of internal bleeding after about a week in the jungle, police had said in August, adding there was no indication she was abducted or sexually assaulted.

But her parents said Tuesday they were seeking “truth and justice” and that it was “impossible physically, mentally to imagine that she could have got any distance at all”.

“We’re struggling because it was difficult to get resources in place fast enough to investigate a criminal angle,” they told the broadcaster.

Nora went missing from the Dusun Resort, not far from Malaysian capital Kuala Lumpur, on August 4, a day after checking in for a holiday with her London-based family.

Hundreds of people, helicopters and sniffer dogs joined the huge search for the schoolgirl, who had limited verbal communication and could only write a few words.

Her parents told RTE they believed Malaysian authorities did not understand the fact that Nora had special needs.

They added that they were still waiting for the full results of the autopsy carried out in Malaysia, and the results of a second post-mortem that took place after her body was transported to London.