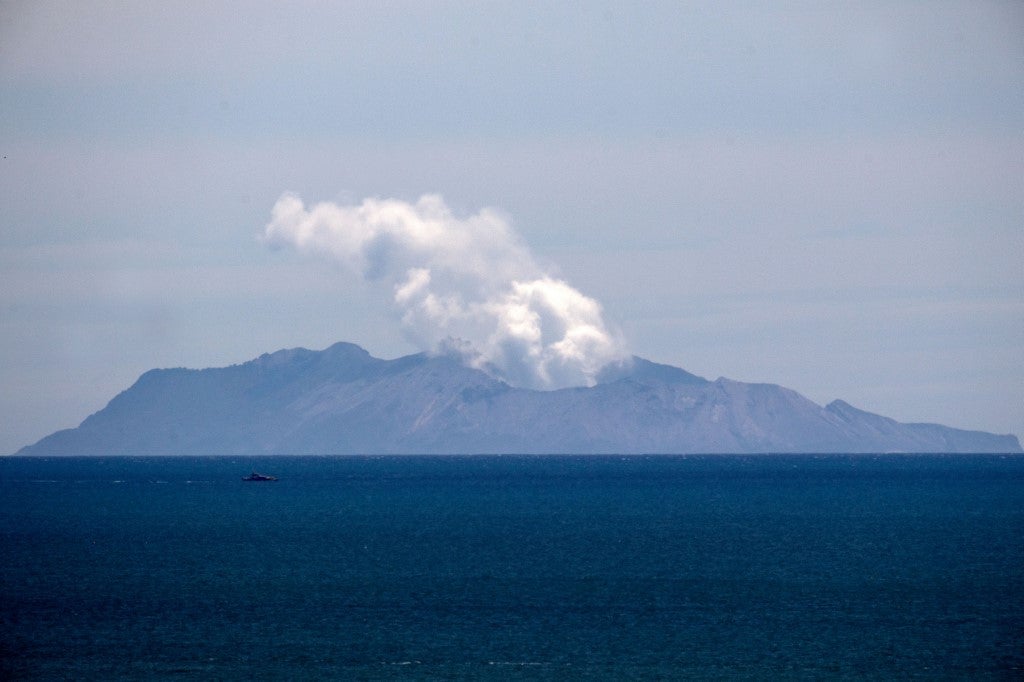 Steam rises from the White Island volcano following the December 9 volcanic eruption, in Whakatane on December 11, 2019. – The smouldering New Zealand volcano that killed at least six people is still too dangerous for emergency teams to recover bodies from, police said on December 11, warning that many tourists who escaped the island were so badly burned they were not yet out of danger. (Photo by Marty MELVILLE / AFP)

WELLINGTON, New Zealand — New Zealand police said Wednesday that the search for two bodies still missing after the White Island volcanic eruption will be reduced in the coming days as the remains had likely been washed out to sea.

Authorities have now recovered the bodies of 16 of the 18 people killed in the December 9 blast at the popular adventure tourist destination, but two have not been found.

All of the 18 have been identified.

Deputy police commissioner Mike Clement said the two missing — Australian Winona Jane Langford, 17, and New Zealander Hayden Bryan Marshall-Inman, 40 — were believed to have died near a stream on the island.

He said a wave of volcanic debris and rainfall since the eruption almost certainly swept them off the island and experts now think the bodies were in the open sea with little chance of recovery.

Emergency services have conducted aerial searches and sent dive teams into the waters off the island in efforts to locate the bodies.

A team of special forces troops also went onto the island and retrieved six bodies despite the threat of another eruption.

Clement said the search would continue but it would be handed over to local police in the next few days.

“We are deeply sorry that we haven’t until this time been able to recover the bodies,” he told reporters.

“We are literally in the hands of the sea.”

At least 12 of the 18 fatalities were Australians, while another three were US citizens living in Australia.

Two, including Marshall-Inman, were New Zealanders working as tour guides.

An 18th victim died in Sydney on Saturday and, while his family have requested his details remain private, media reports have said he was Australian.

A total of 47 day-trippers and guides were on the island when it erupted, hailing from Australia, the United States, Britain, China, Germany, Malaysia and New Zealand.

Authorities are examining why tour operators were allowed to take travellers onto the volcano’s rim just days after scientists had raised its threat level.