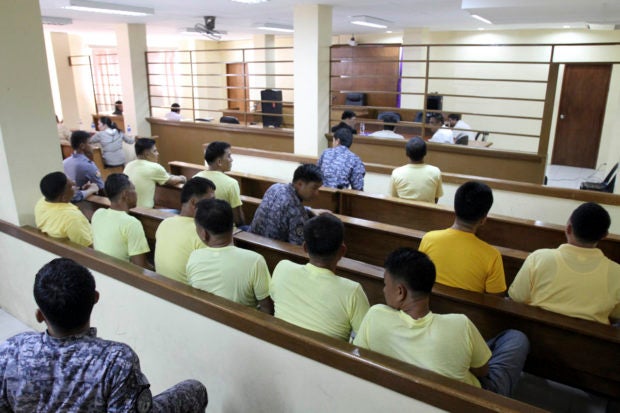 JUDGMENT DAY Suspects in the Nov. 23, 2009, Maguindanao massacre are seen in this file photo taken on June 22, 2011, attending a hearing on the case at the Quezon City Regional Trial Court Annex in Camp Bagong Diwa, Taguig City. After 10 years of trial, they will learn their fate on Thursday when Judge Jocelyn Solis-Reyes hands down her decision. —NIÑO JESUS ORBETA

MANILA, Philippines — The alleged masterminds of the worst political violence in the Philippines will learn their fate on Thursday when a Quezon City court hands down its decision, in a test of the justice system for a nation with a deep-seated culture of impunity.

On Nov. 23, 2009, 58 people, including 32 media workers, were raked with gunfire and dumped into roadside pits in Ampatuan, Maguindanao province, during an attack that was also one of the world’s worst mass killings of journalists.

Amid international outrage, the slaughter cast a harsh spotlight on the Philippines’ deep-seated problems of all-powerful political dynasties, easy access to guns and official impunity.

Over the last 10 years, victims’ families have endured a trial of more than 100 defendants marred by allegations of bribery, defense delays, the murder of several witnesses, and a fear that the still powerful accused could be acquitted.

A guilty verdict “will be a strong signal to human rights abusers that they can’t always get away with murder,” Carlos Conde, Asia researcher for Human Rights Watch, told Agence France-Presse (AFP).

“A not guilty verdict would be catastrophic for the cause of human rights and justice,” he said, adding acquittal would signal to warlords “that it’s business as usual, that they can continue using violence, intimidation and corruption to rule their communities.”

Lawyers for the prosecution are confident of getting a guilty verdict.

“We have submitted eyewitness accounts of the gunmen, as well as statements on how the crime was planned and covered up,” said Nena Santos, a lawyer from Mindanao who represents 38 of the victims.

Leaders of the powerful Ampatuan family, who ruled the impoverished province of Maguindanao, are charged with organizing the mass killing in a bid to quash an election challenge from the rival Mangudadatu clan.

The brazen attack was carried out in broad daylight on a convoy carrying the wife of Maguindanao gubernatorial candidate Esmael Mangudadatu, relatives, lawyers and the journalists, who were stopped at a police-manned checkpoint, hauled to a rise above the road, and killed in a hail of gunfire.

The murders exposed how then President Gloria Macapagal-Arroyo had tolerated the Ampatuans’ heavily armed militia as a buffer against Moro rebels who were fighting for an Islamic state in Mindanao.

Of the original 197 suspects, 117 have been arrested and tried, and 80 have remained at large, including 15 members of the Ampatuan family. Each of the 197 has been charged with 58 counts of murder.

Among those who have been tried is Andal “Unsay” Ampatuan Jr., the alleged leader of the killing force. His father, former Maguindanao Gov. Andal Ampatuan Sr. who allegedly gave the orders for the mass killing, died in jail in 2015.

Even routine court cases can take years to make it through the Philippine justice system, which is notoriously overburdened, underfunded and vulnerable to pressure from the powerful.

This case is no exception, and victims’ families have long worried the Ampatuans, who continue to wield political power and influence, could avoid convictions.

Ampatuans won 25 local seats in May’s elections, including Sajid Ampatuan, the defendant who has been released on bail.

“We are hoping and praying that we will get a fair judgment,” said Mary Grace Morales, whose sister and husband were among the journalists killed.

Judge Jocelyn Solis-Reyes of Quezon City Regional Trial Court Branch 221, which holds proceedings at Camp Bagong Diwa in Taguig City, will promulgate her decision on Thursday morning, more than a decade after the mass murders.

Malacañang is optimistic that the victims will at last receive justice.

“Regardless of under whose administration, justice should always prevail,” said President Rodrigo Duterte’s spokesperson, Salvador Panelo.

Gilbert Andres, a lawyer from the Center for International Law, acknowledged that the trial had been extended because the court needed to balance the rights of the accused with those of the state and the complainants.

But his trust in the courts never wavered, he said. “I’m always hopeful that justice will be served,” he said.

Andres represents 19 complainants, 13 of whom are family members of slain journalists. He and Santos and the victims’ families will be in court on Thursday for the promulgation of judgment.—Reports from Mariejo S. Ramos, Julie M. Aurelio and AFP