Teachers’ pay hike equal to a kilo of rice daily 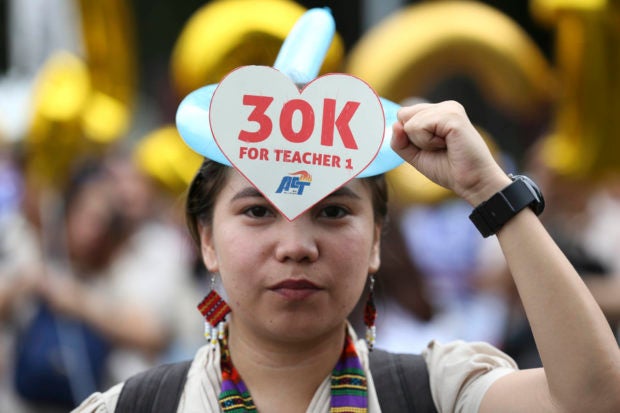 IN DU30’S HANDS Under the draft Salary Standardization Law, entry-level teachers will receive a P6,246 increase in monthly salaries spread over four years, leading to an annual salary of P27,000 by 2023, up from the current P20,754. —JOAN BONDOC

MANILA, Philippines — Entry-level public school teachers will receive a daily pay increase equivalent to a kilo of rice under the proposed Salary Standardization Law (SSL) that has sailed through the Senate and is scheduled for final approval by the House of Representatives after being certified urgent by President Rodrigo Duterte.

Teachers’ groups on Tuesday denounced the increase of just P52 a day, saying it “signaled the death” of the substantial amount they have been seeking for years.

The Senate passed its version of the new SSL bill on third and final reading on Monday, while the House of Representatives approved its version on second reading that same day and would likely finalize its vote before Thursday.

Under the measure, entry-level teachers will receive a P6,246 increase in monthly salaries spread over four years and gradually lead to an annual salary of P27,000 by 2023, up from the current P20,754.

That amount is well below the P10,000 the President himself had once pledged, and will quickly be eaten up by inflation and the loss of their tax-exempt status, according to the Alliance of Concerned Teachers (ACT) and the Teachers’ Dignity Coalition (TDC).

“We are appealing to President Duterte as the one who will sign this into law,” ACT chair Joselyn Martinez said at a press conference in Quezon City. “You promised you would double our salaries. This is in your hands, and we will hold you accountable for this.”

Duterte certified the measure as urgent, requesting in a letter to both Senate President Vicente Sotto III and Speaker Alan Peter Cayetano on Dec. 13 that the bill be taken up.

This pushed the House committee on appropriations to convene its first and last hearing on the SSL on Monday, ACT Teachers Rep. France Castro told the Inquirer.

It passed House Bill No. 5712 in less than 10 minutes without taking questions from teachers or other parties.

The measure was a purported consolidation of all 106 pending bills in the House related to salary increases and additional benefits for teachers and other public sector workers.

But Castro said it appeared that the appropriations committee chair, Rep. Isidro Ungab, “did not even read or try to understand the nature of these different bills.”

The overall increase of just P6,246 for Salary Grade (SG) 11 employees, which include teachers, is all the more peculiar given that higher pay for the country’s 900,000 public educators has attracted support from both the President’s allies and opposition lawmakers.

A bill filed by Quezon City Rep. Alfred Vargas in July, for example, proposed an increase in monthly pay to P45,269 over seven years. Castro’s own bill, which proposed a P30,000 base pay, had more than 60 coauthors in the 16th Congress.

“These lawmakers just followed Malacañang’s marching orders,” said Castro, even though the SSL granted a much lower amount than many of them had proposed in their own measures. “Because it was certified urgent, they complied without defending their bills.”

Fifth round, widening of gap

This would be the fifth round of increases in government workers’ pay since the first SSL under President Corazon Aquino.

Critics of the law have pointed to the extreme widening of the gap between the pay of high-level officials and rank-and-file employees.

The last SSL in 2015, implemented by then President Benigno Aquino III, gave teachers an annual P500 increase over four years—leaving them with a salary this year that is roughly equivalent to what they started with due to inflation.

Under SSL V, SG 11 employees will receive the biggest percent increase in their pay at 7.5 percent, compared with a 2-percent raise for top officials like legislators and the President. But teachers’ groups said the gap was currently so great that it would hardly make a difference.

“The President made a promise. We believed, we waited patiently, but in the end legislators and budget department’s influence prevailed,” said TDC chair Benjo Basas.

ACT similarly decried the “excruciating three-year wait” for a pay increase under Mr. Duterte, saying there was “no way teachers will be satisfied with the unjust and stingy pay raise of SSL V.”