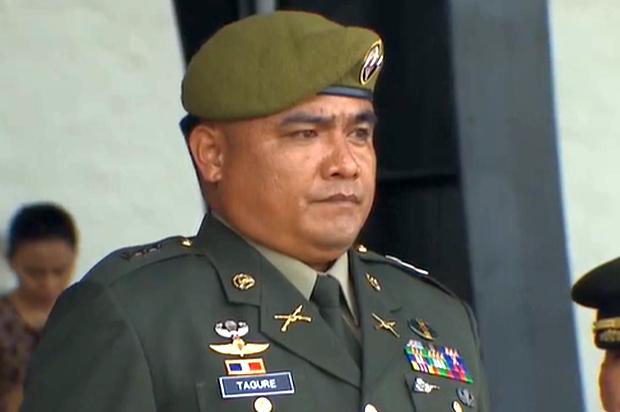 MANILA, Philippines — A junior officer of the Philippine Army’s Special Forces received the second highest military award medal for combat for a mission to rescue a British man and his wife from their captors in Sulu.

President Rodrigo Duterte awarded the Distinguished Conduct Star to Capt. Rico Tagure during the 84th anniversary rites of the Armed Forces of the Philippines at Camp Aguinaldo on Tuesday, Dec. 17.

Tagure, the company commander of 4th Special Forces Company of the 2nd Special Forces Battalion, was recognized for his “conspicuous courage and gallantry in action in the face of armed enemies” during the successful rescue of British national Alan Hyrons and his Filipino wife, Wilma, in November.

Tagure was one of the recipients of 14 awards given during the AFP anniversary.

The military rescued the kidnapped Hyrons couple last Nov. 25 from Abu Sayyaf in Sulu. The couple was abducted at their beach resort in Zamboanga del Sur last Oct. 4.

According to reports, British special forces and intelligence officers also played a role in planning the rescue mission.