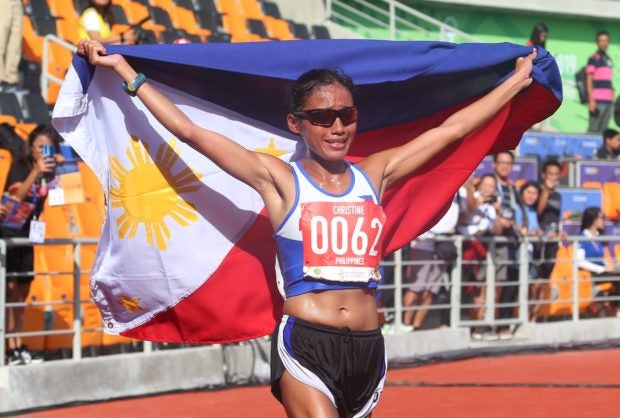 The upper chamber adopted Senate Resolutions No. 245, 246 and 281 which congratulated and commended Christine Hallasgo for winning gold in the women’s marathon; Sarah Noveno Dequinan for bagging the gold medal in the women heptathlon; and medalists from Valenzuela City, respectively.

“Hallasgo brought honor to the country after emerging victorious in the women’s marathon of the 30th Southeast Asian Games at the New Clark City in Capas, Tarlac on 6 December 2019, adding to the country’s increasing gold medal harvest in said sporting meet,” Senate Resolution No. 245 read.

Hallasgo, who hails from Bukidnon, dominated the 42-kilometer race after clocking in 2 hours, 56 minutes and 56 seconds.

“This win is an underdog surprise and a stunning upset coming from a first time SEA games competitor,” Senate Majority Leader Juan Miguel Zubiri, who sponsored the resolution on the floor, said.

Meanwhile, Dequinan “ended the country’s 18-year drought in said event after garnering 5,101 points following the completion of ten (10) events in two (2), days claiming another gold for the country and the title of being the SEA Games’ ‘toughest woman’.”

“With this feat, Sarah has claimed the win that eluded us since the legendary Elma Muros achieved it in 2001, almost 2 decades later. We can once again proudly claim that the toughest woman in Asia is a Filipina,” Zubiri said.

“Both Christine and Sarah had to do the difficult thing of leaving their families in Bukidnon for a long while in order to put the necessary training for the SEA Games, their sacrifice, suffice to say, has paid off immensely,” he added.

“I’m in high spirits as I stand before all of you…only one week has passed since the Philippines clinched the overall championship in the 30th Southeast Asian Games but up to now we are still elated with the historic win that our athletes delivered for our country,” he said.

“Today I’m proud to pay tribute to Valenzuela’s athletes who took part in making history and showed our Southeast Asian neighbors that Filipino talent is truly world-class,” he added.