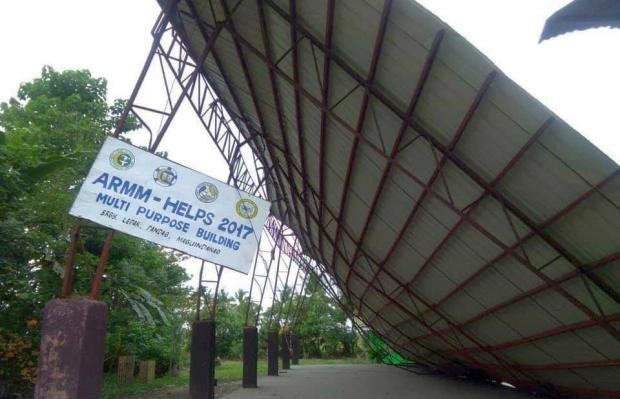 The multi-purpose covered court of Barangay Lepak in Pandag, Maguindanao collapsed during a magnitude 6.9 earthquake that jolted Davao del Sur and several parts of Mindanao on Sunday, Dec. 15, 2019. (Photo from the PDRRMO-Maguindanao)

In its situation report released Tuesday, NDRRMC said the fatalities are from Davao del Sur and Davao Occidental.  49 individuals were reported injured.

NDRRMC said 1,961 families or 9,755 persons were displaced in 12 barangays in the Davao Region.

Most of these families are taking temporary shelter in 13 evacuation centers, the report said.

As of Monday, NDRRMC said 556 aftershocks have been recorded since the earthquake hit Davao del Sur Sunday.

55 of the aftershocks were relatively strong and unnerved residents.

The number of damaged public structures in the Davao and Soccsksargen regions rose to 36,  including seven totally damaged buildings and 11 partially damaged school buildings in Davao del Sur and Sarangani.