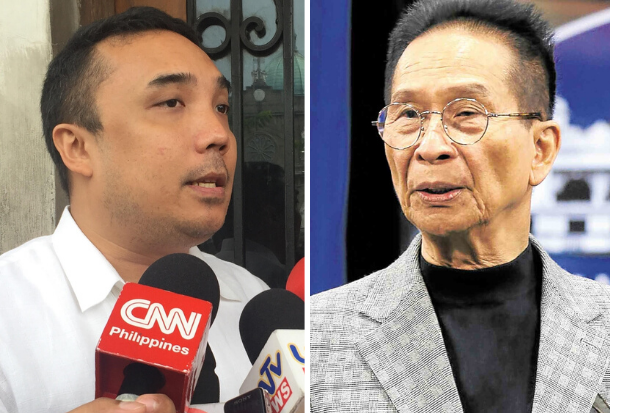 Robredo decided to push aside releasing her drug war report as she prioritized the giving of aid to quake-stricken residents of Davao del Sur.

“Sec. Panelo was obviously taunting the VP. And given the VP’s clear and candid statement that she was choosing to focus on providing help for those affected by the earthquake in Davao instead of pushing through with her ICAD report, his taunt is particularly ill-timed and insensitive,” Atty. Barry Gutierrez told INQUIRER.net in a text message Monday afternoon.

According to Gutierrez, Panelo’s attitude towards the Vice President’s decision shows his lack of empathy to the situation of residents affected by the powerful earthquake, which struck Davao del Sur on Sunday afternoon.

Gutierrez said he does not know what Panelo’s priorities and feelings are, but the Office of the Vice President (OVP) believes the welfare of the people in Davao del Sur and other areas rocked by the 6.9-magnitude tremor should come first.

(If Secretary Panelo really does understand why the Vice President chose to defer the release of the report this morning, after the earthquakes yesterday, maybe he really has no heart and empathy for our countrymen.)

(So, if he does not understand why we should not speak about other things for the meantime and instead put our attention to this important issue, I really do not know what he carries in his heart.)

Gutierrez stressed that the situation in the country’s southern region calls for unity among opposing groups rather than making statements intended to lift a party’s political status.

(It seems not right, that instead of working with the Vice President, they are still picking on her and making the deferment a chance to score political points, while we are in the midst of a tragedy.)

In a press briefing shortly after Robredo decided to suspend the publication of her report, Panelo raised doubts on why it is taking so long for the Vice President to release her findings of the Duterte administration’s drug war.  He even made a conjecture that maybe Robredo really has nothing in her hands, thus, finding it difficult to report anything.

“What’s taking her so long? As the President said, ‘Bring it on, whatever you want to come out with’,” Panelo said.  “It’s really difficult if you have nothing to release and still thinking of what to release. Then it will really take time.”

This is the first time that Robredo deferred the release of her report, which stemmed from her less than 20 days stint as co-chairperson of the Inter-Agency Committee on Anti-illegal Drugs (ICAD). She deliberately let the 30th Southeast Asian (SEA) Games to end before setting the date of her public report.

She also accomplished a series of anti-poverty programs and talks in Mindanao after the SEA Games.

Earlier Monday, Robredo also said she can opt to release her findings before Christmas instead although she noted that it would still depend on the status of Mindanao residents affected by the quake. She nevertheless divulged that the report is already complete, even showing a copy of the file she was supposed to make public on Monday.

For now, however, Robredo said OVP teams have been urgently sent to the affected Mindanao areas to assess the needs of the people.  She likewise said that affected residents so far need tents and clean drinking water.

To recall, Robredo accepted Duterte’s designation of her as an ICAD co-chair last November 6. But 19 days later, Duterte fired Robredo from that post for lack of trust to the opposition leader. Duterte noted that Robredo made the wrong move of talking about the drug war with organizations that he deemed enemies of the state for criticizing his brand of war on drugs.

Robredo vowed to share her findings of the drug war after she got the ax. Both the critics and supporters of Robredo eagerly anticipate her report.