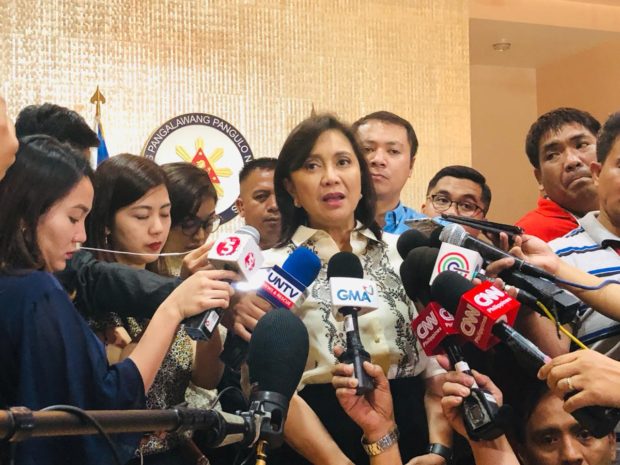 MANILA, Philippines – Vice President Leni Robredo has deferred publicizing her drug war report, in deference to the relief operations being done by the government for victims of the Davao del Sur earthquakes.

Robredo said this Monday at a press conference where she was expected to release her report and recommendations on the drug war.

She said the report may be released anytime, but relief efforts for those affected by Sunday’s Magnitude 6.9 quake should take priority.

Robredo was co-chair of the administration’s Inter-Agency Committee on Anti-Illegal Drugs until she was fired by President Rodrigo Duterte barely three weeks after her appointment to lead the anti-narcotics unit alongside Philippine Drug Enforcement Agency (PDEA) chief Aaron Aquino.

During her brief stint, she advocated for the integration of community-based rehabilitation programs, the scrapping of Oplan Tokhang, and the creation of a baseline data on the drug war.

Robredo said that teams from the Office of the Vice President have already been deployed to the area to assess the needs of the victims, while she also talked with local officials including Davao del Sur Rep. Mercedas Cagas.

According to reports, a six-year-old child has been confirmed dead due to the earthquake, which was felt strongly due to its shallow depth of only three kilometers.

Various intensities were recorded across Davao del Sur its nearby provinces, the strongest of which — an Intensity 7 — was reported in the towns of Matanao and Magsaysay.

Robredo also apologized to the people anticipating her report, although she clarified that it is already available, even showing a copy of the report during the briefing.