HONG KONG – Police fired tear gas against protesters in Hong Kong before meetings Monday between the territory’s leader and Communist Party officials in Beijing, ending a lull in what have become regular clashes between riot squads and demonstrators. 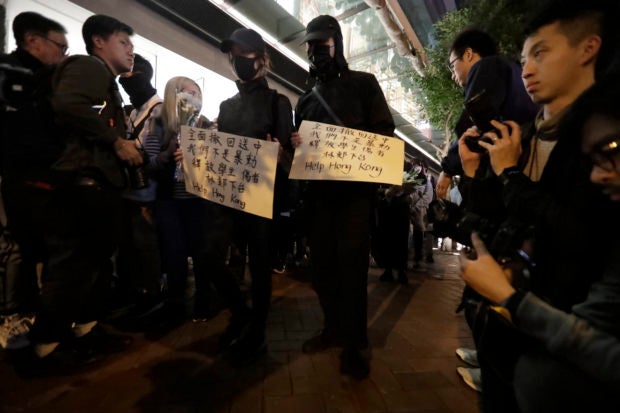 Attendees hold cards listing four of their five demands during a six months anniversary memorial for a man who fell to his death while hanging a protest banner against an extradition bill on Sunday, Dec. 15, 2019 in Hong Kong. (AP Photo/Mark Schiefelbein)

Police said they fired the choking gas after unrest erupted Sunday night in the Mongkok district of Kowloon.

The violence and scattered confrontations in shopping malls earlier Sunday, where police also squirted pepper spray and made several arrests, ended what had been a lull of a couple of weeks in clashes between police and protesters.

The uptick in tension came as Hong Kong leader Carrie Lam was in Beijing on Monday to brief President Xi Jinping on the situation in the semi-autonomous Chinese territory.

Hong Kong’s protest movement erupted in June against now-scrapped legislation that would have allowed criminal suspects to be extradited for trial in Communist Party-controlled courts in mainland China.

It has snowballed into a full-blown challenge to the government and Communist leaders in Beijing, with an array of demands, including that Hong Kong’s leader and legislators all be fully elected.

Read Next
LRT-2 to shorten operating hours on December 24, 31
EDITORS' PICK
51% of Filipinos think it’s dangerous to publish anything critical about Duterte admin — SWS
PhilHealth mess: Whose heads will roll? Roque says he can’t wait to name names
COVID-19 cases in PH overshoot 122,000 mark
Water remains our saving grace right now
Smart 5G goes live
The biggest lottery jackpot in the world is $158 million, and even someone from the Philippines could win it
MOST READ
Captain astonished that his ship delivered Beirut explosive
‘Vexed’: Guanzon raps Topacio over Alzheimer’s remark
Locsin to China: Don’t overinterpret
COVID-19 cases in PH overshoot 122,000 mark
Don't miss out on the latest news and information.