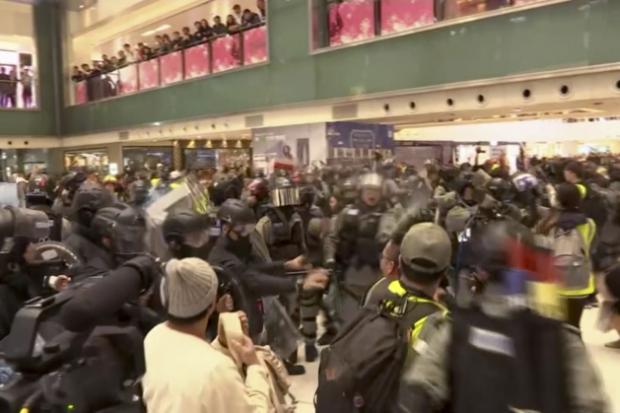 In this image made from video, police and protester scuffle at a shopping mall in Sha Tin district in Hong Kong, with shoppers watch from balconies above, Sunday, Dec. 15, 2019. The rally, which had a Christmas shopping theme, was the latest in a series of demonstrations, which have beset Hong Kong for more than six months. (AP Photo)

Several thousand people, some making heart signs with their hands, turned out in Hong Kong on Sunday in an unusual display of support for the police force, even as riot officers clashed elsewhere with protesters and pepper-sprayed a crowd.

Competing rallies on Hong Kong Island and wildcat protest actions, including vandalism, by black-clad youths at shopping malls dramatically exposed the deep gulf between pro- and anti-establishment camps carved out by six months of demonstrations that have shaken and split the semi-autonomous Chinese territory.

Truncheon-wielding riot officers fanned out at a shopping mall where demonstrators spray-painted protest slogans on the polished stone floor and smashed glass panels. Watched by shoppers, officers pepper-sprayed bystanders and made several arrests, pinning detainees to the floor and marching them away.

Roaming groups of youths in black popped up at other shopping malls, too, shouting slogans. At one mall, a small group adapted a Christmas carol into a protest song and a woman played “Glory to Hong Kong,” a protest anthem, on a harmonica.

The scene was completely different at a waterfront park on Hong Kong Island, where a large crowd showered love on the 30,000-strong police force, broadly criticized as heavy-handed by the protest movement. The rally echoed the Hong Kong government’s view that protesters have become unacceptably violent.

Pro-police demonstrators described protesters as rioters and terrorists and police officers as gallant heroes. They directed thumbs-up signs and shouted words of thanks at officers who policed the sidelines of the rally. One woman yelled that they looked handsome in uniform.

“I’m not against the protesters. It’s OK for them to speak, but in a peaceful way,” said Max Cheng, an IT worker who took part.

When mass anti-government demonstrations first erupted in June against a proposed extradition law, Cheng said she was among the hundreds of thousands who marched.

But she said she later felt repulsed by the violence that increasingly accompanied protests. She said she didn’t demonstrate again until Sunday when she came out to support police, who have shot 26,000 tear-gas and rubber-baton rounds and arrested more than 6,000 people during the six months of snowballing protests.

“It has just gone too far,” she said. “People are too upset, too divided and very emotional.”

But at a separate anti-government rally held simultaneously Sunday just a few hundred meters (yards) away, demonstrators yelled that the protest movement would not let up as long as Hong Kong’s government continues to resist calls for full elections and other demands.

Protester Fong Lee, a social worker, said some people are taking a breather after they turned out in record numbers last month to deliver a stinging rebuke to Hong Kong leader Carrie Lam, turning an election for district councils into a slap-down of her government.

Lam is in Beijing this weekend to discuss the next steps with her bosses in the Communist Party leadership. Demonstrators said they’re not expecting those meetings to yield any concessions and that they regard Lam as an irrelevance.

“Every time when Carrie Lam steps out to say something, she irritates people,” said Lee. “She’s just a puppet.”