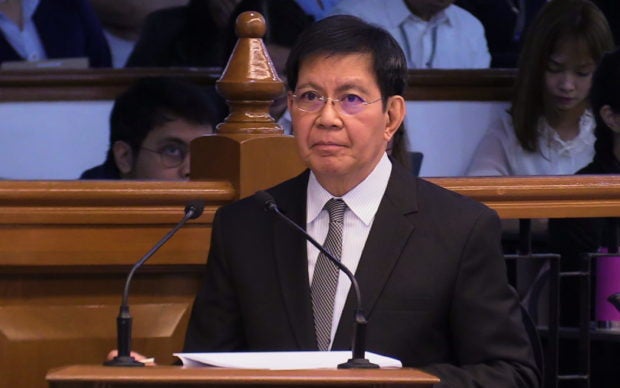 MANILA, Philippines — Sen. Panfilo Lacson is not buying House leaders’ defense that the Congress-approved national budget for 2020 is not riddled with “pork barrel,” stressing that projects without clear details are still considered pork.

Last Wednesday, Lacson bared that the House made last-minute insertions in the budget bill which was later on approved by the bicameral conference panel and ratified by both chambers on the same day.

In an interview with radio dzBB Sunday, he said he had asked Senate finance chair Sonny Angara to postpone the bicam meetings until the House submits its changes to the General Appropriations Bill (GAB). He received the file only on the night of Tuesday.

(The House gave us a USB drive that contains a source file worth P83 billion and list file worth P16.3 billion. When we scrutinized it, we found out that instead of detailing the projects and allocations, they made it even vague.)

(For example, an asphalt overlaying project in one city worth P50 million. The question is, what will you overlay? In which part of the city?)

Lacson further explained that projects without details were similar to the post-enactment discretionary and lump sum funds which the Supreme Court declared illegal in 2013.

(The Supreme Court ruling said any lump sum and unclear projects could be considered pork. Where will you implement it? This will have to be identified by the congressman after the budget is enacted so this is clearly still pork.)

House Speaker Alan Cayetano and Majority Leader Martin Romualdez have maintained that the amendments they sent were not pork, while appropriations chair and Davao Rep. Isidro Ungab said the changes were recommended by President Rodrigo Duterte’s Cabinet and other government agencies.

Although he no longer blocked the ratification of the budget in the Senate, Lacson said he still hopes that the President would veto portions of the 2020 GAB which he found questionable.

(It’s up to the President whether or not he’ll believe our explanation that this is pork and this needs to be removed.)