Simbang Gabi: ‘Let us not miss lessons of darkness’ 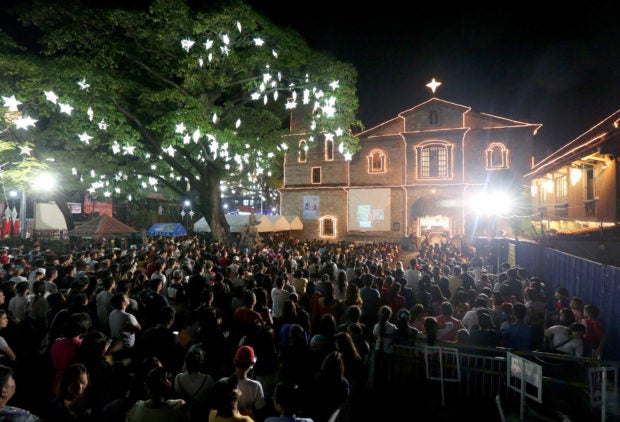 TRADITION In this 2017 file photo, churchgoers in Las Piñas gather to hear the first Mass of the Simbang Gabi. —MARIANNE BERMUDEZ

MANILA, Philippines — One of the things 26-year-old Charina Clarisse Echaluce of Marikina City looks forward to during the holidays is attending the Simbang Gabi (dawn Mass). Her Christmas is not complete without it.

“I get excited when December approaches, but more so during Simbang Gabi,” said Echaluce, a reporter and book author.

For the past 10 years, she has been joining millions of Catholics across the country in one of the most treasured Filipino Yuletide traditions: Nine dawn Masses starting on Dec. 16 and ending on Christmas Eve with the Misa de Aguinaldo.

Many churchgoers believe that completing the dawn Masses would be rewarded with their wishes or petitions being granted. Echaluce admitted that, initially, she had the same thinking and motivation for attending the services.

“During the first few years I wasn’t able to finish the nine days. Ironically, it was during the years when I had not been wishing for anything that I was able to complete the nine consecutive days up to Christmas,” she told the Inquirer.

“Eventually, completing the dawn Masses became my way of giving back to God during Christmas. I was attending it like the regular Masses I go to, where I say my usual prayers,” she said.

Echaluce said she intends to complete the Simbang Gabi this year, not for a wish to come true but to give thanks after the many blessings she and her family received this year.

But she is grateful that two of her wishes had been granted after completing the Simbang Gabi tradition.

“When I was still a student, I wrote a novel which I wished to be published. It was not only published once, but it also came out as a series in a daily newspaper. That, for me, was a miracle,” she recalled.

“Another wish was granted recently when I asked for a sign if I should leave my previous work. I got it and it turned out to be the best decision [I’ve made] because a lot of better opportunities opened up for me,” she added.

Gift of the Holy Spirit

Lingayen-Dagupan Archbishop Socrates Villegas said that while personal wishes may be prayed for during the Simbang Gabi, “the best gift we can ever receive is the Holy Spirit who brings us peace and new life.”

“Is this still clear for us who attend the Simbang Gabi?” Villegas asked. “In every novena, we beg God for a wish in our hearts …. But the best gifts are not food or gadgets or jewelries. None can equal the Holy Spirit as gift for Christmas.”

Masses are usually held at 4 a.m., thus the name Misa de Gallo, or Mass of the Rooster (which crows at the break of dawn). But since the service is held while it is still dark, it has also been called Simbang Gabi in Filipino (literally, night-time Mass).

But for many years now, the Catholic Church in the country has adjusted to the schedule and tempo of modern urban living and agreed, as a “pastoral accommodation,” to hold the Simbang Gabi the night before.

“Darkness always goes with the Simbang Gabi tradition,” explained Villegas. “We walk in the dark trusting that God is our light. Only those courageous to walk through the dark will be able to see the beauty of the stars and the moon.”

According to him, “the darkness speaks of God caring for us. God pierces the darkness and gives us hope. Darkness is beautiful.”

The prelate then asks: “What have we done with darkness?”

He lamented that “we have associated it with crime and ghouls.”

“God walks with us in darkness. Let us not miss the lessons of darkness that accompanies Simbang Gabi. Darkness speaks of God’s guidance,” Villegas said.

Filipinos also associate the tradition with festivities and the enjoyment of native delicacies sold outside churches, like “puto bumbong” and “bibingka.”

At its core, the Mass continues to be a powerful affirmation of the “Filipinos’ affinity to Jesus,’’ said Fr. Jerome Secillano, executive secretary of the Catholic Bishops’ Conference of the Philippines’ permanent committee on public affairs.

“We attend Simbang Gabi as a form of sacrifice. Through it, we thank God for his goodness and because of it we strengthen our reliance on Him,” the priest added.

And “it’s not bad if they can’t complete the nine days,” Secillano said. “But it’s definitely pleasing if they can attend all of it.”