UN climate talks in limbo as rifts among countries remain 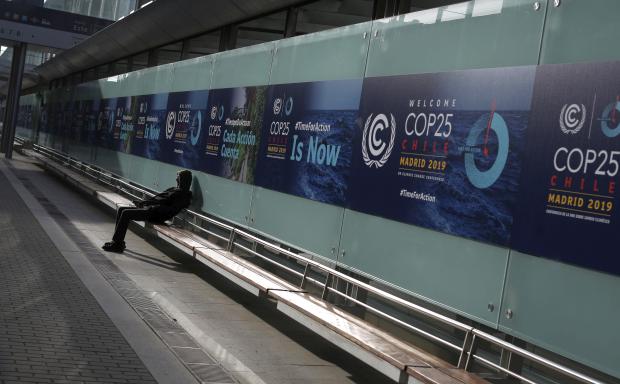 A man sits at the COP25 climate talks congress in Madrid, Spain, Saturday, Dec. 14, 2019. The United Nations Secretary-General has warned that failure to tackle global warming could result in economic disaster. (Photo by MANU FERNANDEZ / AP)

MADRID — Countries remained deadlocked Saturday in talks over combating climate change as U.N. talks dragged on beyond the official deadline with no end in sight.

Chile’s environment minister, Carolina Schmidt, who is chairing the two-week talks in Madrid, urged officials from almost 200 countries to recognize the “overall balance” of the latest draft agreements hammered out overnight.

“We must show the outside world that we deliver,” she said, as officials prepared to hunker down for further negotiations.

But observers and environmental groups expressed outrage at the current proposals, saying they risked undoing or stalling on commitments made in the 2015 Paris climate accord.

“I’ve been attending these climate negotiations since they first started in 1991, but never have I seen the almost total disconnection we’ve seen here (…) in Madrid between what the science requires and the people of the world demand, and what the climate negotiators are delivering,” said Alden Meyer, a climate policy special at the Union of Concerned Scientists.

Meyer said the current drafts didn’t reflect urgent warnings from scientists that greenhouse gas emissions need to fall sharply, and soon, in order to keep global warming to 1.5 degrees Celsius (2.7 Fahrenheit) by the end of the century. By most calculations, temperatures have already risen 1 degree Celsius since pre-industrial times and efforts so far put the world on course for a 3-4 degree Celsius rise by 2100, with potentially devastating consequences particularly for vulnerable developing countries

“The planet is on fire and our window of escape is getting harder and harder to reach the longer we fail to act,” Meyer said.

Growing concern about climate change has been reflected in mass protests staged around the world over the past year, often by young activists concerned about the future they and their children might face as the planet heats up.

Demonstrations took place inside and outside the venue of the talks in the Spanish capital, with Swedish teenage activist Greta Thunberg one of the most prominent voices calling for urgent action to curb emissions.

Some countries said it was time to heed those demands.

“We have the science. We have the collective will to deliver enshrined in the Paris agreement. And now it is time to step up,” said Ola Elvestuen, Norway’s environment minister.

“A weak encouragement will not be understood by the outside world,” he said. “It will send a message that we are not listening to science.”

Among the countries pushing back against agreeing new measures to help poor countries and set new emissions-cutting targets was the United States, which under President Donald Trump announced it is pulling out of the Paris accord.

“I’ve just heard the comments of many others here today on the need to include an expansive additional language on gaps and needs,” said Kimberly Carnahan, a State Department official representing the United States at the talks.

“We don’t support such language and we would not think that it would lead to the balance of this text, but rather take us quite far in the other direction,” she said.

Small island nations, which fear disappearing beneath the waves over the coming decades as global warming leads to sea-level rise, bristled at the U.S. position.

Harjeet Singh of the humanitarian group Action Aid said the European Union would also shoulder blame if the talks in Madrid fail to make progress.

“It does a lot of sweet talking but it doesn’t really help people, so it is as good as taking the line of the United States,” he said.

Schmidt, the talks’ chairwoman, said that the latest drafts attempt to provide “a sensible and workable solution” on rules for international carbon markets, one of the key issues left over from last year’s meeting in Katowice, Poland.

Also at stake is a system for channeling money to help poor countries cope with the economic impact of climate change, which is predicted to devastate fisheries and agriculture in some parts of the world.