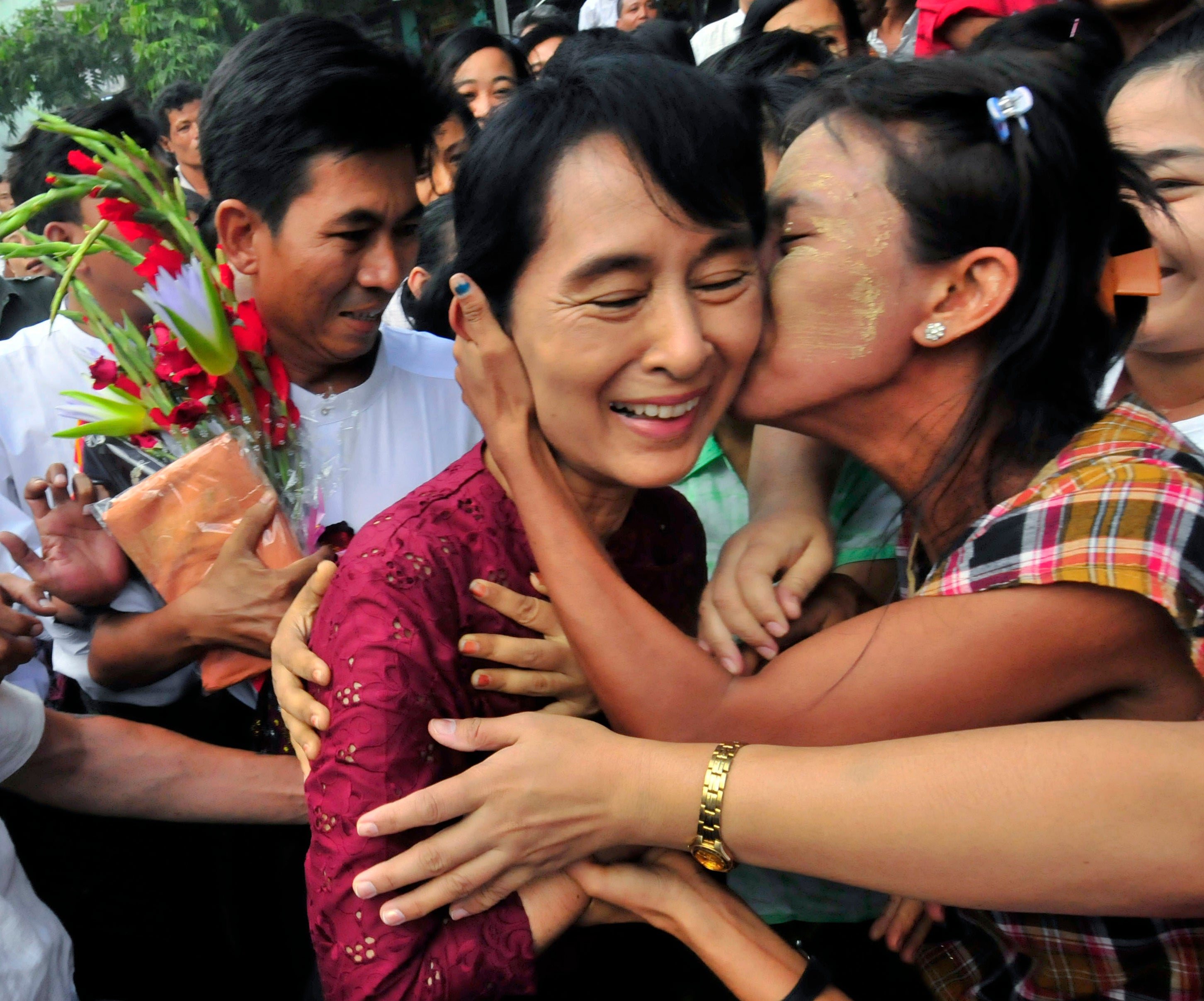 FILE – In this July 7, 2019, file photo, one of the villagers welcoming Myanmar democracy icon Aung San Suu Kyi kisses her as she visits Nyaung Oo market in Nyaung U village, Myanmar. There was a time when Suu Kyi was the hero of the human rights set, whose nonviolent struggle against her country’s military dictatorship was admired by people around the world and won her the Nobel Peace Prize in 1991. Now she is seen by many of her admirers as an apologist for war crimes against its Muslim Rohingya minority. (AP Photo/Khin Maung Win)

BANGKOK — What drives Aung San Suu Kyi, the leader of Myanmar who this week defended her country at the International Court of Justice against charges that it carried out genocide against its Muslim Rohingya minority?

There was a time when Suu Kyi was the hero of human rights advocates, whose nonviolent struggle against her country’s military dictatorship was admired by people around the world and won her the Nobel Peace Prize in 1991. She spent a decade and a half under house arrest, more or less in solitary. She was the target of an assassination attempt. She never wavered.

Now she is seen by many of her former admirers as an apologist for war crimes. More than 700,000 Rohingya fled to neighboring Bangladesh to escape a brutal 2017 counterinsurgency campaign by the army, which the U.N. and rights groups say involved murder, mass rape and the razing by fire of entire villages.

U.N. investigators suggested the military was guilty of genocide. Myanmar denied any large-scale human rights violations and said its actions were a response to surprise attacks by militants that killed a dozen members of the security forces, a position Suu Kyi repeated at the court in The Hague.

“Aung San Suu Kyi tried to downplay the severity of the crimes committed against the Rohingya population,” Nicholas Bequelin, Amnesty International’s regional director, said in an emailed statement. “In fact, she wouldn’t even refer to them by name or acknowledge the scale of the abuses. Such denials are deliberate, deceitful and dangerous.”

“We urge her to exercise her personal and moral responsibility towards the Rohingya and acknowledge the genocide committed under her watch,” seven of them wrote in a joint statement released Wednesday. “Aung San Suu Kyi must be held criminally responsible, along with her army commanders, for crimes committed.”

There are signs that she shares the paranoia of many of her predominantly Buddhist countrymen about Muslims, most recently evidenced during a visit with Hungary’s right-wing leader, Viktor Orban, in which the two issued a statement saying that “coexistence with continuously growing Muslim populations” posed a challenge for their respective countries.”

Leadership runs in her blood. Bravery and sincerity accounted for much of her appeal when she helped found her party, the National League for Democracy, in 1988 during an abortive anti-military uprising. Her credibility was assured because she was the daughter of the country’s martyred founding father, Gen. Aung San, and she acts accordingly as a woman of destiny.

“Arguably that’s exactly how she’s seen herself all along,” Peter Popham, author of her biography, “The Lady and the Peacock,” said in an interview by phone. “And by putting herself in The Hague when she didn’t have to go there, she is once again doing everything she can to imitate him in this.”

Just as her father defended the country against British colonialists, she sees herself defending it against their modern manifestations, such as the U.N., Popham said.

A consensus among the experts is that there is a strong element of domestic politics in her recent actions, especially her trip to The Hague.

Although her taking office in 2016 nominally reinstated democratic rule, she is handicapped by a constitution guaranteeing the military continued powers in government, including enough seats in parliament to block reforms and constitutional change.

The army is little loved except for its position against what it calls “illegal immigration” by the Rohingya and “terrorism” by its militants. Most of Myanmar’s ethnic Burman majority hold views on the Rohingya similar to the military’s, as do many members of other minorities.

By taking on the mantle of protector of the nation, and even defending the military against international criticism, Suu Kyi can win over Myanmar nationalists, putting her party in a stronger position for next year’s general election. She can also leverage public sentiment to pressure the military to agree to the constitutional changes she has been seeking.

Suu Kyi “is presenting herself as defending Myanmar at The Hague and quite a large number of her supporters see her as doing just that. Many people in Myanmar see the Rohingya issue as a kind of Muslim conspiracy to take over Myanmar,” Jane Ferguson, a senior lecturer in anthropology at The Australian National University, said in an email interview.

By representing Myanmar at the International Court of Justice, “she draws upon her aura as a champion for the Myanmar people (as vague as that might be) and as a politician. If she is seen to be defending Myanmar in the eyes of enough of her supporters (and it is read that way by many, as far as I can tell) then it will attract votes in 2020.”

There is such prejudice against the Rohingya throughout Myanmar society that Suu Kyi’s presence is a political statement looking toward the 2020 elections, agrees David Steinberg, a professor of Asian Studies at Georgetown University in the United States.

“Her speech (in the court) will probably help the NLD in the elections, and perhaps give her a bit more space with the military, but neither trusts each other. Although she talks a lot about democracy, I think she has a more messianic concept of her present and future role, based on her father’s reputation.”

Mark Farmaner is the director of Burma Campaign UK, which was closely allied with Suu Kyi for years in her fight for democracy. Now that she has come to power, he has become disenchanted.

He speculated that this position is also a useful tactic ahead of next year’s election.

“She is whipping up nationalism, portraying herself as the defender of the nation against foreign interference. Aung San Suu Kyi may also see this case as an opportunity to further her so far failed approach of persuading the military that civilian rule is not a threat to them,” Farmaner said.

“Aung San Suu Kyi is showing the same traits now as she did when she was fighting the military dictatorship,” he said. “She is refusing to back down and stubbornly sticking to the course she has set for herself.”