LONDON – British Prime Minister Boris Johnson says it looks like his Conservative Party has won “a powerful new mandate to get Brexit done” in the country’s general election. He says the work of delivering Brexit will begin as soon as all the results are in. 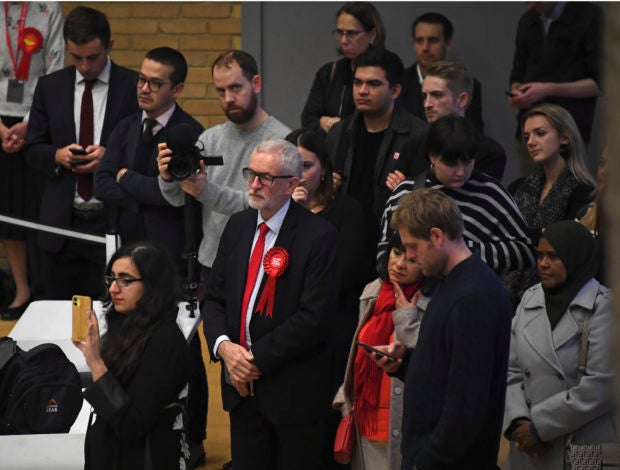 British opposition Labour Party leader Jeremy Corbyn and his wife Laura Alvarez wait for the declaration of his seat in the 2019 general election in Islington, London, Friday, Dec. 13, 2019. The first handful of results to be declared in Britain’s election are showing a surge in support for to the Conservatives in northern England seats where Labour has long been dominant. (AP Photo/Alberto Pezzali)

Johnson called the election “historic” as he was announced the winner of his Uxbridge constituency in suburban London.

Johnson’s Conservative Party appeared on course Friday to win a solid majority of seats in Britain’s Parliament— a decisive outcome to a Brexit-dominated election that should allow Johnson to fulfill his plan to take the U.K. out of the European Union next month.

It would also make Johnson  the most electorally successful Conservative leader since Margaret Thatcher, another politician who was loved and loathed in almost equal measure. It would be a disaster for left-wing Labour leader Jeremy Corbyn, who faced calls for his resignation even as the results rolled in.

It would be the biggest Tory majority since Thatcher’s 1980s’ heyday, and Labour’s lowest number of seats since 1935.

The exit poll, regarded as a reliable though not exact indicator of the likely result, also projected 55 seats for the Scottish National Party and 13 for the Liberal Democrats.

As ballot papers were counted early Friday, the Conservatives took a swathe of seats in post-industrial northern England towns that were long Labour strongholds. Labour’s vote held up better in London, where the party managed to grab the Putney seat from the Conservatives.

A decisive Conservative win would vindicate Johnson’s decision to press for Thursday’s early election, which was held nearly two years ahead of schedule. He said that if the Conservatives won a majority, he would get Parliament to ratify his Brexit divorce deal and take the U.K. out of the EU by the current Jan. 31 deadline.

That message appears to have had strong appeal for Brexit-supporting voters, who turned away from Labour in the party’s traditional heartlands and embraced Johnson’s promise that the Conservatives would “get Brexit done.”

“I think Brexit has dominated, it has dominated everything by the looks of it,” said Labour economy spokesman John McDonnell. “We thought other issues could cut through and there would be a wider debate, from this evidence there clearly wasn’t.”

Johnson did not mention the exit poll as he thanked voters in a tweet. “Thank you to everyone across our great country who voted, who volunteered, who stood as candidate,” he said. “We live in the greatest democracy in the world.”

Read Next
Palace renews call for Congress to pass FOI bill
EDITORS' PICK
PH preps for China virus: Question of when, not if
Beyond water service: Maynilad builds massive infrastructure projects to clean up Metro Manila waterways
Museums ‘put to sleep,’ churches closed amid volcano’s unrest
Seventh judge assigned to handle De Lima case
SM continues to send relief assistance to remote towns in Batangas
Get exciting deals and discounts when you download the new McDonald’s App
MOST READ
Taal Volcano flexes signs of restiveness anew
Passengers from Wuhan, China to be flown out of Kalibo, Aklan – CAAP
Lacson on Duterte’s threat to end VFA over Bato’s canceled visa: Where is the connection?
Part of Aurora Boulevard in Cubao closed from Jan. 25 – Feb. 1
Don't miss out on the latest news and information.