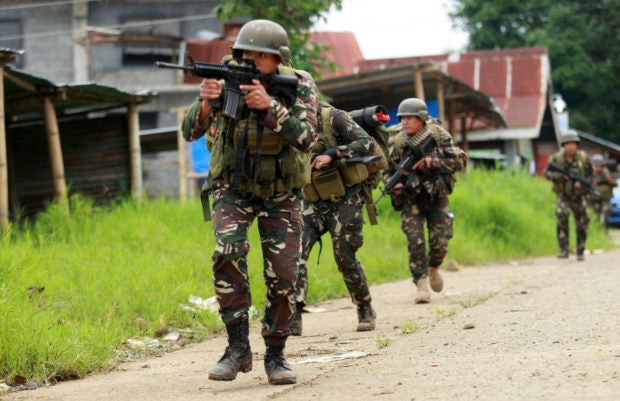 WAR ON TERROR Government soldiers, in this 2017 photo, fan out on the streets of Marawi to flush out members of the Maute terror group who laid siege to the city. The attack by Islamic State-linked groups on the Lanao del Sur provincial capital prompted President Duterte to declare martial law in Mindanao. —JEOFFREY MAITEM

CAGAYAN DE ORO CITY—With the impending lifting of martial law in Mindanao, a human rights watchdog has called for an investigation of alleged abuses by the military and police on civilians during almost three years of military rule on the island.

Bishop Redeemer Yañez, a convenor of Barug Katungod and official of the Iglesia Filipina Independiente (IFI), said international human rights watchdogs should investigate the alleged violations of government forces to make the Duterte administration “account for the killings and other human rights abuses during the military rule.”

This developed as the “lumad” (indigenous peoples) group Kalumaran called for the immediate release of its vice chair, Datu Jomorito “Jomong” Goaynon, who had been in jail in the last 10 months because of what it said were “fabricated” charges against him.

Goaynon and Ireneo Udarbe, a farmers’ leader, were arrested by the police and the 4th Infantry Division (ID) Military Intelligence Bureau on Jan. 28 on charges of rebellion and illegal possession of firearms and explosives.

“The arrest was another case of tanim ebidensya (planting evidence) as both were on a jeepney on the way to a meeting and were accosted at a surreptitiously set up checkpoint at the highway near the 4th ID headquarters,” Condez said in a statement released on Dec. 10, International Human Rights Day.

Kalumaran said Goaynon had been an “outspoken critic of militarization of lumad communities and the encroachment of agribusiness plantations and large-scale mining in ancestral lands.”

“His illegal arrest and imprisonment unmask the viciousness of the Duterte regime’s Oplan Kapayapaan,” Condez said. “Far from its promise of peace and security in the region, Mr. Duterte’s martial law has instead unleashed more terror and instability by murdering our leaders, vilifying community organizations and closing lumad schools.”President Duterte first imposed martial law in Mindanao after Islamic State-inspired armed groups led by the Maute brothers and Abu Sayyaf leader Isnilon Hapilon attacked Marawi City in May 2017. But even after the war in Marawi ended in October that year, Congress approved an extension of martial law in Mindanao three times, citing as reasons the possible regrouping of terrorist groups and the communist insurgency in the region.

Protest actions
In March 2015, Goaynon was one of seven indigenous peoples’ rights defenders who were subjects of writs of habeas corpus and amparo filed against them by the Army’s 4th ID for mounting protest actions.

Yañez said martial law had allowed the Duterte administration to strengthen the military’s combat forces in lumad and farming communities.
“These communities are the guardians of the remaining ‘last frontiers’ of natural resources like mineral deposits, hydropower and rich agricultural lands that Mr. Duterte has pledged to foreign investors,” Yañez said.

Since martial law took effect in 2017 at the height of the Marawi siege, more than 160 people, mostly political activists, were killed while 700 others faced charges in courts, he said.