BANGKOK — Thousands of Thais and tourists flocked to the Chao Phraya River banks in Bangkok to witness an ancient ceremony of a royal barge procession on Thursday, marking the end of the coronation ceremony for King Maha Vajiralongkorn.

The king, together with Queen Suthida and 14-year-old Prince Dipangkorn Rasmijoti, boarded a century-old barge bearing the figurehead of a swan-like mythical creature while other members of the royal family accompanied them in separate vessels. 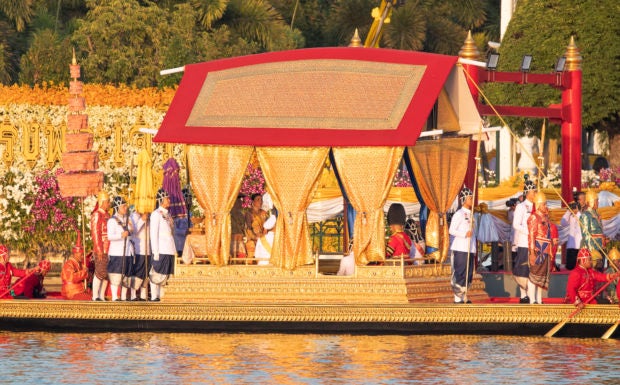 A total of 52 decorated barges were powered by 2,200 oarsmen selected from the Royal Thai Navy, who sang rhythmic songs as they paddled a distance of 3.4 kilometers (2.1 miles) between two key piers.

Authorities reserved at least six locations that can accommodate up to 10,700 people along the river banks, while dozens of temples, schools, and private properties opened their space for the special event.

The ceremony was televised nationwide. Many spectators came as early as 6 a.m. to occupy the best spot, according to Thai TV networks.

The ceremony is seen as a showcase of Thai royal traditions and reverence to the monarchy. Most of the Thai onlookers wore yellow shirts, as requested by the government — the color representing the king. Free transport and food were made available.

Vanar Chandhasin said she was unable to hold tears of joy when she saw the king and queen on the barge.

“I am here because I want to show my loyalty to the king. For me, the king represents the long history and glorious culture of Thailand. Without the royal family, we will have nothing to be proud of,” the 40-year-old said.

Since the 67-year-old king came to the throne following the death of his father in 2016, many of his moves have been seen as attempts to increase his influence over the country’s administration. He revived ancient traditions such as the king’s ownership over public assets and assumed direct control of some key military units as well as the governing body of Buddhist monks.