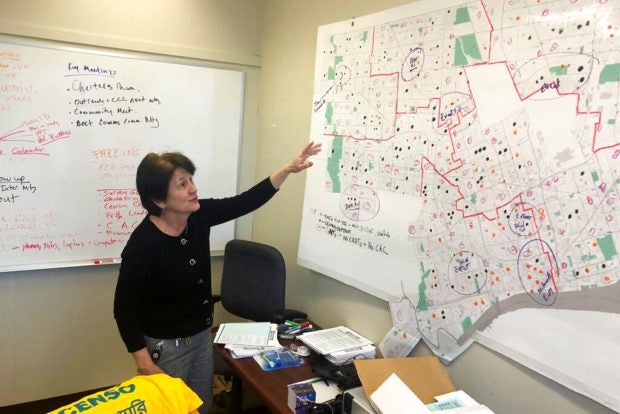 In this Nov. 22, 2019, photo, Detroit 2020 Census Campaign executive director Victoria Kovari looks over a Detroit map showing city neighborhoods that were under-counted in the 2010 census. In 2010, 220,000 Detroit residents were living in households that did not fill out questionnaires, costing the city $2,000 to $5,000 annually for every uncounted person, said Kovari. (AP Photo/Corey Williams)

DETROIT — When the U.S. Census Bureau starts counting people next year in Detroit, obstacles are bound to arise: The city has tens of thousands of vacant houses, sparse internet access and high poverty — factors that will make it the toughest community to tally.

Other Rust Belt towns that have lost population and cities in the Sun Belt with large numbers of immigrants and transplants will pose similar challenges in the coast-to-coast headcount, an Associated Press analysis of government data found. Nationwide, about a quarter of the population lives in hard-to-count neighborhoods, including a majority of people in Atlanta, Cleveland, Dallas, Los Angeles, Milwaukee, Memphis, Tennessee, and Fresno, California.

Obtaining an accurate count is critical because the census determines the allocation of $1.5 trillion in federal spending and decides which states gain or lose congressional seats.

“There is nothing more important, no higher priority, than reaching the hard to count,” Census Bureau Director Steven Dillingham told lawmakers last summer.

Detroit’s recent resurgence has led to refurbished downtown buildings, new boutique hotels and an invigorated arts community. But the renaissance has done little for some residents who live in persistent poverty and harbor lingering mistrust after decades of racial upheaval. The many empty homes are relics of the mass exodus that began in the 1950s and sent Detroit’s population plummeting from about 1.8 million to 670,000.

About 86% of Detroit’s population lives in hard-to-count neighborhoods, by far the largest proportion of any major U.S. city, the AP analysis found.

Annette Brock, who lives northeast of downtown, said some residents see no connection between answering questions from the government and improving their lives.

About 70% of Detroit residents turned in their 2000 Census forms. That figure fell to 64% a decade later, when the national rate was 74 percent.

In 2010, 220,000 Detroit residents were living in households that did not fill out questionnaires, costing the city $2,000 to $5,000 annually for every uncounted person, said Victoria Kovari, executive director of Detroit’s 2020 Census Campaign.

To get those numbers back up, city census teams have knocked on nearly 130,000 doors in neighborhoods that were under-counted in the last census and spoken with more than 26,000 people. But Kovari is still concerned. For the first time, the Census Bureau would like respondents to answer questions online, but the agency estimates that 30% of Detroit households lack regular connection to the internet, roughly double the national percentage.

The Census Bureau sends workers to homes that don’t respond. In Detroit, that means knocking on the doors of vacant houses and others where residents may not answer.

Almost 80 percent of Detroit is African American, and observers “know we are going to have an undercount among the black population,” said Diana Elliott, an Urban Institute researcher who co-wrote a report last summer that estimated anywhere from 900,000 to 4 million people could be missed.

“That puts Detroit at greater risk just because of the demographics,” Elliott said.

Researchers have learned that Latinos, African Americans, non-English-speaking immigrants and children under 5 are the hardest to count, along with tribal members, nontraditional families and people with informal living arrangements.

Experts say the Trump administration’s effort to put a citizenship question on the questionnaire may scare off immigrants who live here illegally and others. Although the effort failed, opponents of the question say damage has already been done.

California and New Mexico have some of the nation’s largest concentrations of Latinos. In those states, over 40 percent of the population lives in hard-to-count neighborhoods.

By contrast, Vermont, Maine and West Virginia have some of the highest concentrations of white residents and older people, who are more likely to fill out census forms. There, less than 5% of the population lives in hard-to-count neighborhoods.

To tout the importance of the 2020 census, California is spending an estimated $187 million on advertising and events and recruiting neighborhood leaders to encourage participation. California census officials have hired liaisons whose sole focus is 15 specific hard-to-count groups, including farm workers, the homeless and people without broadband subscriptions.

“You really have to understand the structural barriers that exist,” said Ditas Katague, director of the California Complete Count-Census 2020 Office.

Gathering accurate population data in Detroit can be daunting because of its size and the emptiness of some neighborhoods. The city was almost bursting its limits through the 1950s, until good-paying auto and other manufacturing jobs allowed a burgeoning white middle class to find bigger homes and better schools in the suburbs. Years of housing discrimination made it harder for the city’s black residents to leave.

Tensions between Detroit’s black residents and its mostly white police department exploded in a riot in 1967, scarring the landscape and driving more white flight.

The 1973 election of Coleman A. Young as the city’s first black mayor was a milestone in Detroit’s rise as a city dominated by African Americans. But soon many in the black middle class also sought better homes, schools and safety in the suburbs.

In the late 2000s, the national housing crisis and economic downturn fell hardest on the Motor City. Foreclosures abounded. Three of every 10 adults was jobless and about 4 of every 10 people lived in poverty. Thousands more left the city, and the population dropped by 2010 to 713,000.

In 2013, Detroit became the largest city in the U.S. to file for bankruptcy. When it emerged the following year, it was able to wipe out or restructure about $7 billion in debt, sparking a turnaround that helped fuel a massive demolition program. Since 2014, about 19,000 vacant houses have been razed, mostly with federal dollars.

Mayor Mike Duggan’s office has recruited volunteers and groups to go into neighborhoods to speak to friends and churches to explain why census participation is important and to dispel fears.

“You just can’t walk and knock on somebody’s door, now,” said Charles Jones Jr., who also lives northeast of downtown. “You’ve got to find somebody in the neighborhood that the people trust. Not strangers. They’re scared of strangers.”

Edith Floyd understands why being counted matters. Working in a community garden, the 70-year-old digs up dirt for composting and makes winter preparations for greens and other crops still in the ground. A cold, stiff breeze blows across scores of vacant lots, broken by the few homes that have withstood time and busy bulldozers leveling vacant structures.

“We need all the money we can get for the city and for ourselves,” Floyd said. “There’s very few people over here, and everybody counts. Everybody needs to participate.”