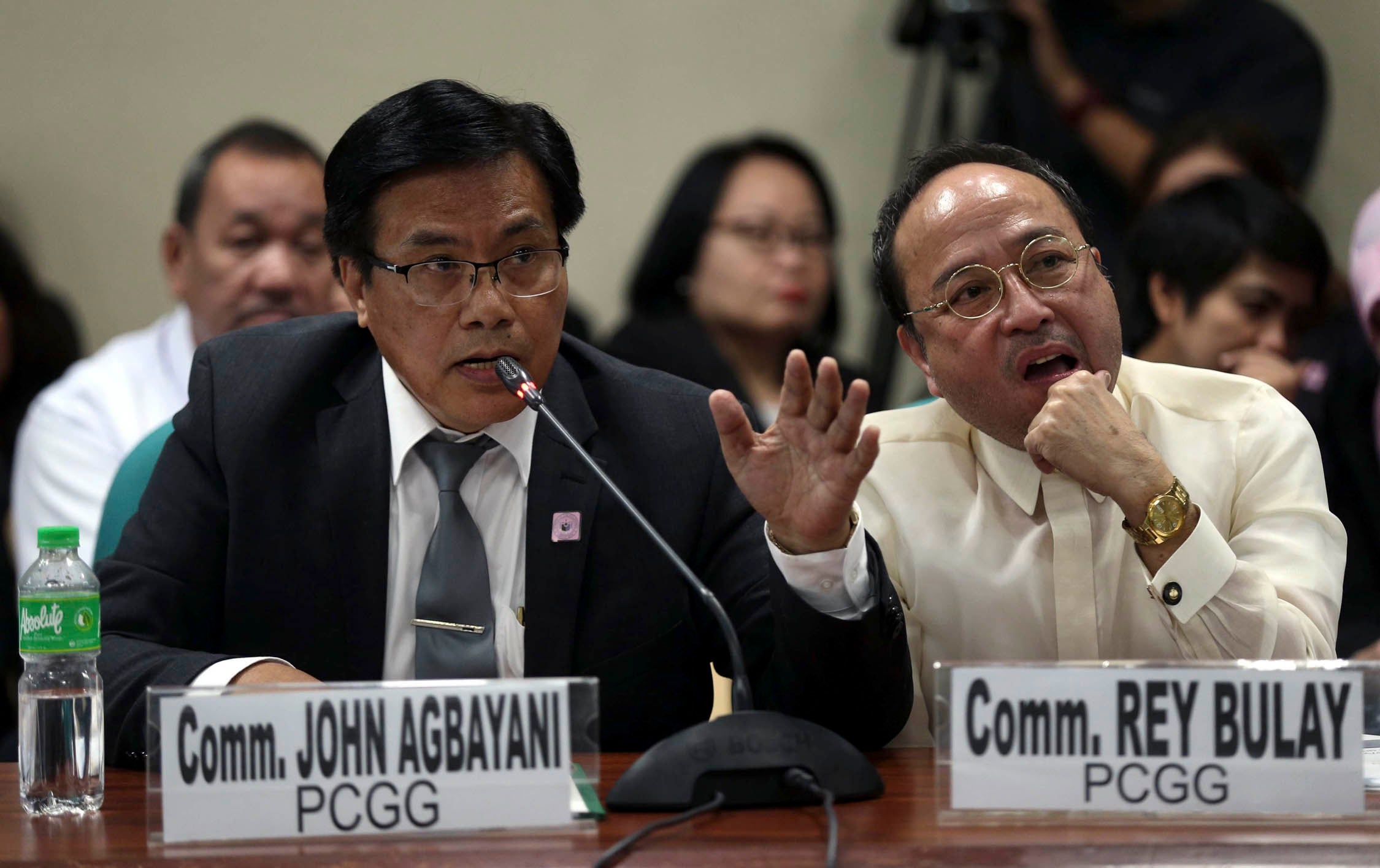 NEEDING NEW BLOOD Commissioners John Agbayani and Rey Bulay of the Presidential Commission on Good Government appear in a February 2018 Senate hearing on bills strengthening the Office of the Solicitor General and the Office of the Government Corporate Counsel. The PCGG officials said some key positions in the 33-year-old agency tasked with recovering ill-gotten Marcos wealth remained vacant due to lingering threats to abolish it. –INQUIRER FILE PHOTOS

MANILA, Philippines — The lingering threat to abolish the Presidential Commission on Good Government (PCGG) is hampering efforts to recover more of the ill-gotten wealth of the Marcos family and their cronies, according to its acting chair, Reynold Munsayac.

The PCGG is targeting “an additional P100.7 billion of assets under litigation” on top of the P173.241 billion ill-gotten assets in cash, real estate and jewelry it has recovered since 1986, he said.

But “recurring efforts” to abolish the agency has made it difficult to recruit young blood, particularly lawyers and other professionals who can break the inertia and infuse the agency with new energy to look for remaining hidden assets, he said, without going into specifics.

PCGG Commissioner Rey Bulay, testifying at a 2018 Senate hearing on a proposal to merge the commission’s functions with those of the Office of the Solicitor General (OSG), raised the need to hire “new professional tracers” to identify yet undiscovered Marcos assets.

Later, Commissioner Jose Agbayani said there were “no takers” for vacancies, including four slots for directors and seven for “lawyers or professional tracers.”

Munsayac said professionals who might consider joining the PCGG were discouraged by reports on its fate. “They are aware that their prospective careers at the PCGG will always be clouded with uncertainty,” he said in an email.

PCGG personnel currently number 131, distributed among five departments. They include three full-time lawyers and seven special legal counsels deputized by the OSG to prosecute cases lodged at the Sandiganbayan. The PCGG’s three commissioners are all lawyers.

Munsayac said the PCGG also needed to reinforce its information technology capability “to access and retrieve records and pieces of evidence related to pending cases by using computer-based programs and equipment.”

It was then President-elect Joseph Estrada who first mulled the idea of abolishing the PCGG. Just before assuming office, he said he would dissolve it with the help of Congress.

Bills were filed but none were approved beyond the committee level. Still, lawmakers acknowledged Estrada’s apparent displeasure and slashed the PCGG budget for 1999 in half.

Through the years, similar proposals were aired by then Senators Aquilino “Nene” Pimentel Jr. and Sergio Osmeña III. Even former PCGG Chair Andres Bautista, whose stint ran from mid-2010 to 2015, supposedly aired a preference for abolition at one point.

Then Budget Secretary Benjamin Diokno was the latest to resuscitate the proposal, calling for the merging of the functions of the PCGG and the Office of the Government Corporate Counsel (OGCC) with those of the OSG as part of the government’s right-sizing policy.

But in November 2016, President Rodrigo Duterte said he wanted the PCGG’s powers expanded so it could go after the ill-gotten wealth of “other corrupt officials” not covered by the executive order of President Corazon Aquino creating the commission in 1986.

The House of Representatives approved its version of Diokno’s plan in the 17th Congress. The Senate would have followed suit but Sen. Richard Gordon changed his mind after two hearings. Thus, no bill was finalized for Duterte’s signature.

In an interview, Gordon said the PCGG was not beyond redemption but needed a timeline and competent people: “Bigyan ng timeline! What you need is somebody to bullwhip the lawyers and give them the necessary support to look for [other lawyers). Lagyan ng matinong tao.”

That the PCGG lacks lawyers is a problem, the senator conceded.

“There are so few lawyers defending the PCGG cases in the Sandiganbayan. Matatalo talaga ’yan. It’s designed to fail. If we really want to win, we have to provide young, idealistic, talented lawyers who can make a name for themselves by bringing down the so-called untouchables in the country,” he said.

He said the President would have to play a more active part, telling the PCGG what should be accomplished at a specific time and offering perks depending on its performance.

“It will benefit his administration if he [does],” the senator said. “Unfortunately, there are questions [whether this is workable] because [he has] alliances. That is something that affects [public] perception.”

Duterte is widely perceived to be close to the Marcos family, as manifested in the interment of the dictator’s remains at Libingan ng Mga Bayani and his apparent fondness for the dictator’s son and namesake, the defeated vice presidential candidate.

Gordon said one of the ways the government could reinforce its sincerity was to provide the PGCC the necessary funds to hire more lawyers and update its equipment at the same time.

“All in all, in the 33 years of the PCGG’s existence, it has received from Congress an average of P116.782 million [annually],” said Munsayac.

According to a study made by Gordon’s office, the PCGG had a recovery rate of P1 to P80, meaning it recovered P80 in ill-gotten wealth for every peso it spent from its budget.

EO No. 2 issued days later indicates the new administration’s position that Marcos and his cohorts “be afforded a fair opportunity to contest these claims before appropriate Philippine authorities.”

The PCGG remains under the Office of the President, which oversees its performance, but is administered by the Department of Justice “for budgetary purposes,” according to Commissioner Bulay.

In one of the Senate hearings on the proposed merging of the PCGG with the OSG, Jose Calida said his office as statutory counsel “cannot refuse” to represent the commission in the cases filed in the Sandiganbayan.

But he also mouthed phrases like “bloated bureaucracy” and “eliminating redundant, duplicative and overlapping functions and organizations in the executive branch” to remind senators of the “policy to right-size” government offices.

Asked about the current dynamic between the PCGG and the OSG, Munsayac responded in an email: “The PCGG has a good working relationship with the OSG … In fact, the OSG continues to assign lawyers with competence and integrity to handle the PCGG cases.”

Calida made it clear in the Senate hearing that he favored the PCGG’s abolition given that there was “no real distinction as to the nature of cases handled by the OSG on one hand and the OGCC and PCGG on the other.”

He said that as things stood at that time, the PCGG was “winning most of its legal battles” but that the creation of 20 additional divisions to perform the functions of the OGCC and PCGG in his office would “promote efficiency and reduce bureaucratic delay.”

But the PCGG’s Agbayani countered this suggestion, saying the commission’s functions of tracing and recovery of ill-gotten wealth, asset management and disposal “are not the same” when compared to the OSG’s “singular function of lawyering.”

Agbayani told senators of the PCGG’s “struggle, given the resistance of plunderers through dilatory and well-funded litigation.” He said its ongoing efforts — a target of P102 billion in assets still being contested at that time — would be disrupted by the commission’s abolition.

Abolition, he added, “conveys the wrong signal that our country is favoring the plunderers.”

In a 2016 statement, the PCGG blamed the “slow grind of the justice system, coupled by dilatory tactics employed by the defendants” for its woes.

Then Commissioner Ruben Carranza singled out “the bureaucracy, the changes in administrations, plus of course the fact that you don’t have enough full-time lawyers passionate about what they’re doing to handle cases.”

While the PCGG’s research department is hampered by difficulties in locating “new additional assets after 31 years,” Agbayani said that “as far as what is known, there are still others being searched.”

Munsayac, in a chance interview at the Senate, said these pursuits were “not banner cases” but were still about cronies’ ill-gotten wealth.