Acabado asserts ‘sworn duty’ to protect against kidnappings; gets support of police

MANILA, Philippines — Police Brigadier General Reczon “Rex” Acabado has spoken out on the recent kidnapping along Paseo de Roxas, Makati City, late Monday evening, December 9. The incident was captured in a viral video showing a van speeding off as a woman struggled to escape from a side door, shrieking desperately for help from frightened bystanders.

In a Facebook post published on December 9, Acabado decried the kidnapping as “unacceptable,” emphasizing the police obligation to “protect our children.” He called for unity among the force and highlighted the pressing need for increased police visibility, particularly at night. 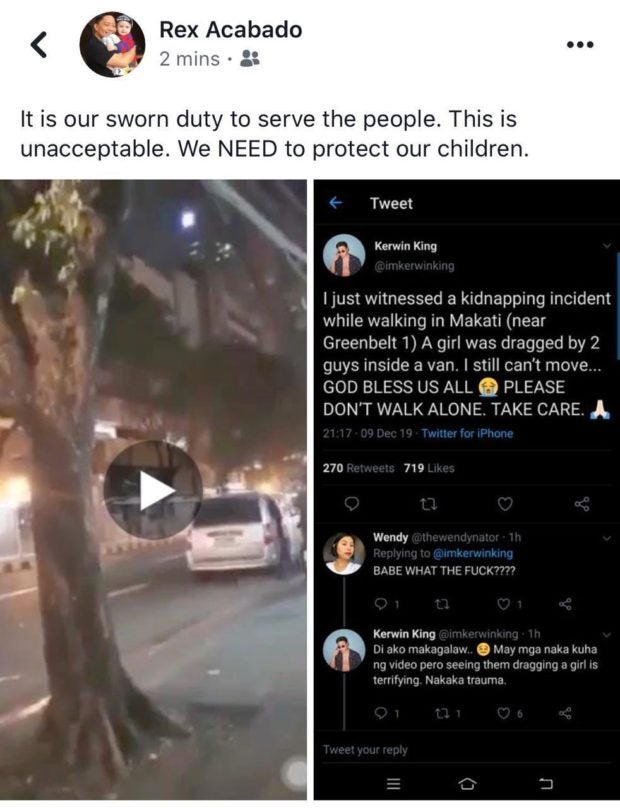 So this has been confirmed by makati police as a kidnapping. And there have been similar videos circulating. Some are saying its chinese nationals kidnapping other chinese nationals. But any other information would be much appreciated. Stay safe out there folks.

As the rise of reported abductions in the Metro prompts demands for accountability from the Administration, action to regain public confidence falls squarely on the Philippine National Police. However, as the successor to former Chief PNP Oscar Albayalde is yet to be named, a void in the leadership remains.

In a recent pronouncement, President Rodrigo Duterte challenged the PNP to give him a “better deal” for its next chief, specifying that the ability to kill drug lords would be among his deciding factors.

PNP Spokesperson Police Brig. Gen. Bernard Banac echoed this directive, saying that although all senior PNP officers shared the President’s vision of a drug-free Philippines, only those committed to eradicating high-value targets would ultimately have a shot at being named top cop.

Asked about potential candidates for Chief PNP, Banac noted Acabado demonstrated a “firm resolve to accomplish missions” without the expectation of fanfare, and “would not be cowed by threats or intimidation.” Banac described Acabado’s leadership as being that of a balanced disciplinarian, observing that while he valued the personnel’s welfare, he never hesitated to confront and sanction any erring officers.

Former PNP chief, Gen. Roberto “Bobby” Lastimoso recently shared that he has known “few people more devoted, more loyal to flag and country” than Gen. Acabado. The retired General confidently stated he would “not hesitate to endorse (Acabado) as the next PNP chief, given his competence, integrity, and honesty.”

The decision to name PNP chief becomes more urgent as the end of the year draws closer. The President claims he himself will take over leadership of the PNP if no qualified candidates are presented.

When Inquirer reached out to Acabado to get a statement on the killing of drug lords as a necessary criterion for Duterte to appoint the next PNP Chief, the general kept it concise.

“I would ascertain that all good people get what they deserve,” he said. “As would be the case for all those who are evil.”