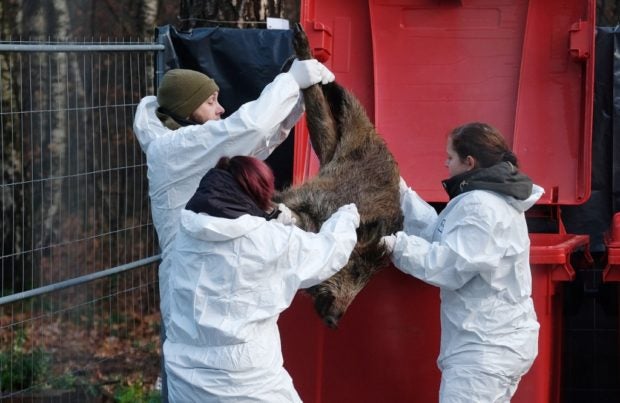 Workers of the veterinary department dispose of a dead boar during an animal disease’s drill aimed at preparing Saxony’s officials to a possible outbreak of the African swine fever, in Grimma, eastern Germany, on December 3, 2019. AFP

Berlin, Germany — Sniffer dogs, drones, and electrified fences: Germany is deploying a full array of defenses to stop boars from bringing swine fever into the country and avert a disaster for its thriving pork industry.

“The question is no longer if swine fever will come to Germany but when,” Torsten Reinwald, a spokesman for Germany’s hunting federation, told AFP.

The virus is not harmful to human health but can cause deadly bleeding in domestic pigs and boars.

The only way of getting rid of it is through mass culling at farms – a nightmare for German farmers.

Half of Germany’s pork production of five million tons a year goes to foreign markets, making it Europe’s biggest exporter of the meat.

It is feared that even a single case could wreak havoc.

Losses could run into billions of euros and the European market would be flooded with cut-price pork.

Farmers first began to worry when swine fever was identified at a pig farm in western Poland in November.

But it was the discovery of a boar with the fever near the town of Nowogrod Bobrzanski – just 40 kilometers (25 miles) from the German border – that really raised the alarm.

As a result, German regions are pulling out all the stops.

In Saarland, near the French border, packs of sniffer dogs are being sent out to find dead boars so as to quickly remove any potential carriers of the virus.

In Saxony, which neighbors Poland, vets and emergency workers are holding drills in case of an outbreak and using drones and infrared cameras to find sick boars.

Further north, in Mecklenburg-Western Pomerania, 50 kilometers of electrified fence to stop boars along the border with Poland are being prepared.

But, fearing that a spread to Germany may be inevitable, Denmark is already putting up a fence along its own 70-kilometer border.

There have been several recent outbreaks of African swine fever in Central and Eastern Europe since 2014, which have devastated the local pig farming industries.

“Since it first appeared in Europe in 1957, the virus has almost always been brought into other countries through airports and ports. It has been exterminated everywhere except Sardinia” in Italy, said Sandra Blome, a swine fever expert at the Friedrich-Loeffler Institute.

The irony is that Germany so far has profited from the ravages of swine fever at farms in China, where more than a million pigs have had to be culled.

That pushed up the price of pork imports, which are expected to more than double in volume in 2019.

Until now, the possibility of humans spreading the virus inadvertently – for example through discarded pork product sandwiches – was thought the most likely.

Even though it has no effect on humans, the virus can survive for months in smoked goods such as hams.

At train stations and in parks and forests up and down the country, posters from Germany’s agriculture ministry urge people not to leave any food behind.

Reinwald also pointed out that the virus can survive for up to three months in mud carried in tire threads.

But the attention now is firmly on roaming boars.

“The possibility of an infection from sick boars crossing the border is very high, higher now than the risk from humans,” Blome said.