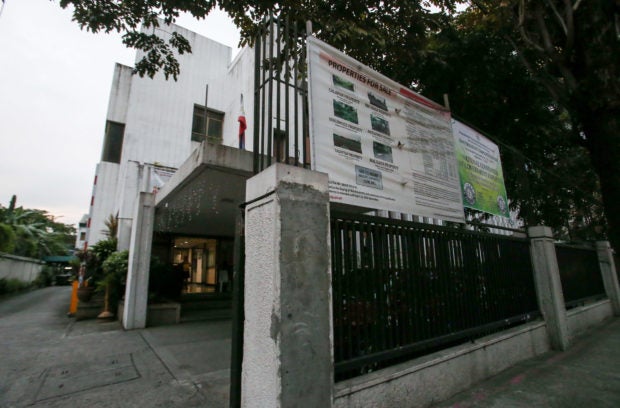 MANILA, Philippines — Steve Salonga, son of the late Senate President Jovito Salonga, maintains that the briefcase stolen in New York during his father’s visit there in March 1986 contained only duplicates of documents that could pin down Ferdinand and Imelda Marcos, and their cronies in the ill-gotten wealth cases lodged by the Presidential Commission on Good Government (PCGG).

His claim, in effect, belies Solicitor General Jose Calida’s insistence that Jovito Salonga lost the original documents in the theft and that the PCGG was relying on photocopies.

The Sandiganbayan has chastised the PCGG and the Office of the Solicitor General (OSG) for using photocopies as evidence, resulting in the dismissal this year of three cases against the Marcoses for violation of the Best Evidence Rule.

The Inquirer reached Steve Salonga through former Sen. Rene Saguisag, his cousin and a close observer of goings-on in the PCGG during the yearlong stint of Jovito Salonga as the commission’s first chair.

“No original evidentiary documents were lost in that incident,”Steve Salonga said in an email to Saguisag that the latter eventually forwarded to the Inquirer.

His father’s briefcase was “snatched from a chair,” he said. “The case had facsimile copies of relevant pleadings and files. As you know, lawyers do not casually carry original evidentiary documents around. In this case, there were none.”
Said Saguisag in a separate email: “My best recall is that what was lost were duplicates/copies, not origs, by someone other than Uncle Jovy (I won’t name him in fairness).”

But in his book “Presidential Plunder: The Quest for the Marcos Ill-Gotten Wealth,” Jovito Salonga named PCGG Commissioner Pedro Yap as the owner of the briefcase that was taken by a snatcher, along with his wife Lydia Salonga’s purse.

He said his own briefcase was not stolen. At that time, the then PCGG chair was in New York to testify in a federal court that was hearing a civil case against the Marcoses.

“Luckily, my briefcase was safe, it was with Colonel [Thelmo] Cunanan who, after alighting from the car of the Philippine consulate, did not enter the Korean restaurant but walked to the adjoining Wentworth Hotel to check if there was any message for us,” he recalled. “When [Cunanan] came back to the Korean restaurant with my bag, I felt a little relieved.”

Then Salonga added a detail: “What was even more sensational, the tabloids reported that the briefcase contained what might be irreplaceable documents about Marcos’ stolen wealth. That was, of course, a lie, since we had several photocopies of every important document in our possession.”

“In any case, I understand it was the sensational version of the news that had been flashed to the Philippines… ‘Salonga lost his briefcase to a thief in New York,’”he said.

Steve Salonga directed the Inquirer’s attention to the reports of the New York Times (NYT) and the Washington Post (WP) on the incident.

The NYT website still shows a report dated March 21, 1986, identifying Jovito Salonga as the head of an agency “investigating the finances of former President Ferdinand E. Marcos.”
The report said Salonga alerted police about a briefcase “containing documents ”˜of a sensitive nature’ [that] was stolen from him last night in midtown Manhattan.”

It said the purse of Salonga’s wife was also taken “when the couple were in the waiting area of the Woo Lae Oak restaurant at 77 West 46th Street in Manhattan just before 8:45 p.m.”

(In Salonga’s book, the restaurant was Oak Woo Lae.)

The NYT report said “documents taken from Mr. Salonga were copies of the originals, which are in Manila, according to Morton Stavis, president of the Center for Constitutional Rights, which is representing the Government of President Corazon C. Aquino.”

It described the perpetrator as “an unidentified Oriental man [who] pointed to five $1 bills under a table in the waiting area. Mr. Salonga’s daughter Victoria bent down to pick up the money and Mr. and Mrs. Salonga also looked under the table.”

But when the Salongas turned around, “the man and Mr. Salonga’s briefcase and his wife’s Gucci purse had disappeared.”

A police officer involved in the investigation noted that the ploy used was “not a common way” of stealing a bag since those who do so “usually ” just run up to you and snatch it off your arm.”

The WP report discussed “an Asian wearing a trench coat [who] stole a briefcase stuffed with sensitive documents from the Philippine government’s chief investigator, who brought the records to the United States from Manila in an effort to recoup the wealth of deposed President Ferdinand Marcos.”

It said the Salonga couple and their daughter “were in the waiting area of a midtown Manhattan restaurant” when the briefcase “containing the documents, plane tickets, passport and $3,000 in cash and traveler’s checks”was snatched. 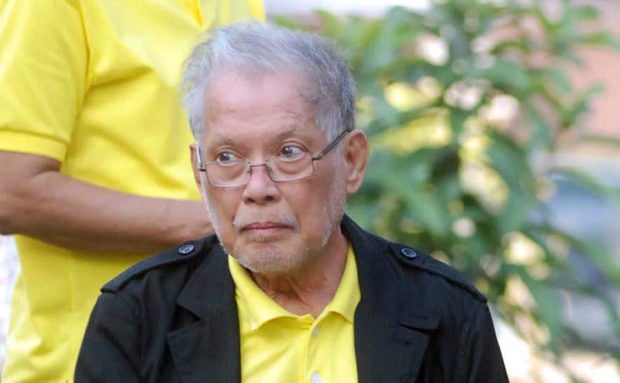 The WP said it was unclear if the robbery was connected to Salonga’s effort to recover ill-gotten wealth, but a police investigator was quoted saying, “This incident is being treated as a diplomatic incident,”and adding that “this type of incident is not uncommon in the midtown area.”

The report quoted “sources close to Salonga” who speculated that the incident “may have been committed by a Filipino who feared his name may appear” in the documents.

There was no mention whether the papers taken were originals or duplicates.

The Inquirer ran a story on the incident on March 22, 1986. It quoted an Associated Press report saying the documents were “Ferdinand Marcos’ personal papers, described as an ”˜encyclopedia of corruption’ [involving] $30 million bank accounts in Switzerland, France and the Caribbean.”

“The papers also contain the former Philippine president’s handwritten promise to his wife Imelda that she would inherit the Philippine government upon his death,” the report said.

On Oct. 29, 1998, or more than 12 years after the incident, then Inquirer columnist Belinda Cunanan mentioned a trove of “Marcos-era documents stored in the vaults of the Bangko Sentral ng Pilipinas,” formerly the Central Bank.

The column was prompted by a letter Cunanan had received from Jovito Salonga, portions of which she quoted verbatim.

Salonga apparently wanted to answer in detail a privilege speech delivered by then Sen. Aquilino “Nene” Pimentel Jr. denouncing the PCGG for “failing to sort out and classify several cartons” of papers in the Central Bank vaults.

Pimentel, Salonga’s running mate in the 1992 presidential election, said that within the “unsorted and unclassified documents perhaps lies the key to the culpability of the Marcoses and their cronies.” 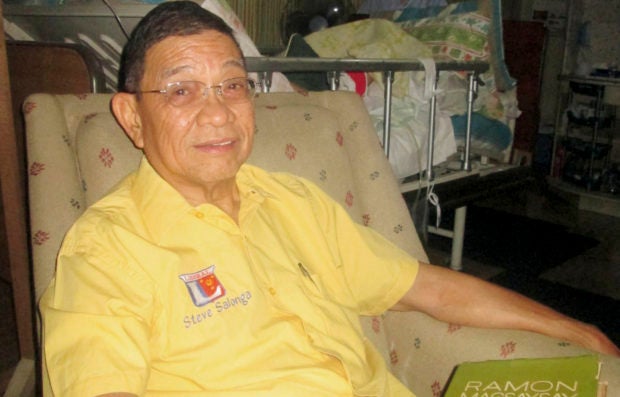 Then chair of the Senate committee on justice and human rights, Pimentel said the apparent failure to prosecute the Marcoses could be blamed on the “failure to use the documents properly.”

In his letter to Cunanan, Salonga recalled resigning as PCGG chair after President Corazon Aquino included him among her 24 senatorial candidates in the May 1987 national elections.

He said “documents and articles” supposedly enough to fill a room were retrieved from Malacañang in February 1986 “by a group headed by Dr. Angelita Reyes, a friend and classmate of President Aquino.”

“They were turned over to me, as PCGG chairman, in the afternoon of March 1 (a Saturday), in the Dasmariñas Village residence of Dr. and Mrs. Reyes, in the presence of the following: Minister of Defense Juan Ponce Enrile, AFP Chief of Staff Gen. Fidel V. Ramos, Finance Minister Jaime Ongpin, PCGG Commissioner Pedro Yap (my companion) and Mr. Jose Reyes, husband of Dr. Reyes,”he said, adding that he had a photograph of the turnover.

Salonga said that since there was no venue available, Ongpin suggested that “all suitcases and boxes be brought to the Central Bank for safekeeping. I agreed. Jimmy arranged for an armored car from the Central Bank to bring the materials there.”

He said he and Yap followed the armored car to the Central Bank. Ongpin apparently followed in a separate vehicle.

“The suitcases and boxes were unloaded near the office of CB Governor Jose B. Fernandez, who arrived a little later from a golf game,” Salonga said. He said copying machines were already “assembled near Gov. Fernandez’s office.”

Salonga said the papers “were photocopied for several days and nights, on a nonstop basis, under our supervision, and the copies were secured in several places.”

Among the “key documents”discovered then were the “contracts signed on March 20 and March 21, 1968, by Ferdinand E. Marcos and Imelda Romualdez Marcos, respectively, with Credit Suisse Bank, adopting the use of pseudonyms (William Saunders for Ferdinand and Jane Ryan for Imelda),” he said.

Salonga recalled that papers and jewelry “were carefully left, in an orderly fashion, in the vaults of the Central Bank,” and that all articles were inventoried.

When the PCGG was assigned its own office in the PhilComCen building in the Ortigas district, “one copy each of all documents were kept in the PCGG,” Salonga said. “To make sure that there would be a copy abroad, I had these documents computerized and classified by the law offices of Olson and Kendall in Los Angeles.”

Salonga added that when he was still PCGG chair, he went over the folders of these documents “classified under the names of the various associates and cronies of the Marcoses.”

The originals, he stressed, “are in the vaults of the Central Bank. It is necessary that they be kept in an orderly manner and properly safeguarded and secured. Our history as a people during the Marcos years will not be complete without these documents, many of which are almost incredible.”

In one of his emails to the Inquirer, Saguisag scoffed at Calida’s insistence that the original documents pertaining to the Marcoses’ ill-gotten wealth were stolen in New York.

“The SolGen sounds like Alibi Ike, given his and Digong’s (President Duterte) loyalty to the Marcoses,”he said.

In another email, he added: “To note that Digong has no enthusiasm in going after the Marcoses. Were Bongbong (Ferdinand Marcos Jr.) the Vice [President], he might have stepped down by now, given his health issues, feeling protected, for himself and Polong (the President’s son, Davao Rep. Paolo Duterte) and his cronies.”

Calida, in turn, downplayed insinuations that his closeness to the Marcoses could be crucial in the resolution of the 18 ill-gotten wealth cases still pending in the Sandiganbayan.

When asked, he said they were not that close: “Hindi naman parang close, as in close. Minsan syempre we have friends also. What’s wrong with that? Where’s the conflict? Well, everybody has friends. That’s not an issue for me. I am a lawyer, I am a professional.”

He said “it cannot be avoided” that he would encounter Marcos family members in social events, and mentioned seeing Sen. Imee Marcos at the Senate hearing where the proposed OSG budget for 2020 was discussed.

Calida also insisted that he did not intervene when it came to PCGG cases handled by OSG lawyers.—With a report from Inquirer Research