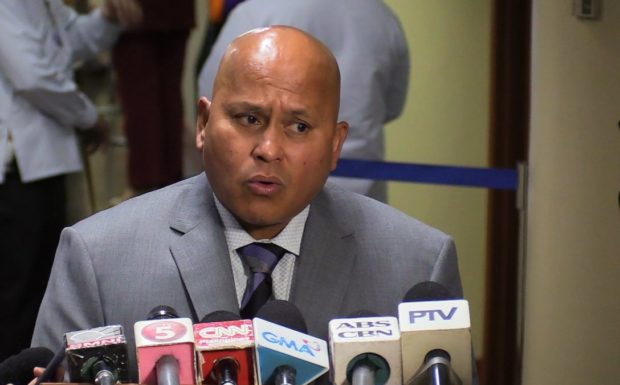 MANILA, Philippines — Sen. Ronald “Bato” Dela Rosa claimed Tuesday that most university students, or about 90 percent of them, were pro-government, while the remaining 10 percent were leftists or communists.

Despite this, Dela Rosa lamented that students were being “deprived” of a chance to get closer to the government as police and military men were prohibited from entering their schools.

The former national police chief, however, provided no data for making such a statement.

[All we want is give the government equal access because, let’s say 100 percent of UP students, how many of them would really want to become communists?]

[Being a communist is not illegal. It’s also important. But I think the biggest number is only 10  percent.]

[There are still 90 percent who are  pro-government and they  were deprived of  the chance to become closer to the government that they want to serve because the police and military are not allowed entry.]

At present, only those recruiting communists are allowed entry in schools, said Dela Rosa, who previously headed the Philippine National Police.

[Only the leftists are allowed entry into campuses to recruit those who want to join the  NPA. Our government is not allowed. It’s unfair.]

The senator’s rants were prompted by a reporter’s question about the University of the Philippines professors’ reported campaign against a Senate panel report, allowing, among others, the occasional presence of police forces in school premises.

Committee Report No. 10 was drafted by the  Senate Committee on Public Order, which is chaired by  Dela Rosa as lead investigator in the alleged recruitment of students by leftist groups.

READ: Senate panel seeks probe of solon, 7 others over recruitment of minors

But Dela Rosa defended the report, saying it was neither picked out of thin air nor fabricated just because he was going after the communists.

The report, he said, was produced after a “lengthy, and exhaustive”  probe.

[Let’s stop pretending. You have been fooling the people. Enough is enough. You are misleading the youth.  You’re bringing them to the mountains and arming them.]

Dela Rosa stressed that the government had no plans of curtailing academic freedom as it would only want to have equal access to university students.