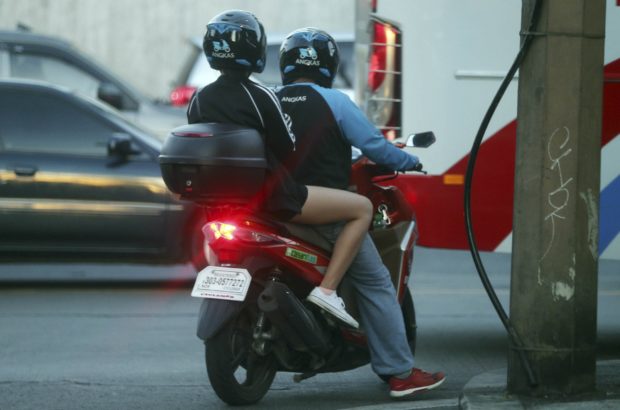 This is to allow other operators to participate in the pilot run, the DOTr said in a statement Tuesday.

Last June, a six-month pilot run was approved in aid of legislation for Congress to further evaluate pending bills seeking to legalize the use of motorcycles as public utility vehicles (PUVs). The pilot run was originally set to end on Dec. 26.

The extension, however, will be an “expansion of the study” by allowing new motorcycle taxi service providers to participate in the pilot run to give the riding public more choices and push operators to provide a “higher standard of service,” TWG chairperson Antonio Gardiola Jr. said.

Last Nov. 20, the DOTr heard proposals from six other motorcycle-ride hailing firms, namely Citimuber, JoyRide, MoveIt, EsetGo, Sakay, and VroomGo. All were keen on participating in the pilot run.

The extension of the pilot run will also provide the TWG more time to widen the scope of their study on appropriate standards and capacities for motorcycles to be considered safe, convenient, and eligible for franchise.

“We want to determine their operational readiness and compliance”, Gardiola said.

“We also want to determine whether or not motorcycles are really a safe and viable form of public transportation. That is always our priority — the safety, security, and comfort of the riding public,” he added.

The TWG has already submitted its recommendation, and a decision on the proposed extension is due for release in the coming days.

The TWG was created to primarily gather data and determine the viability of motorcycles as a safe mode of public transportation.

The commuter group The Passenger Forum (TPF) has appealed to the DOTr to reveal to the public its findings on Angkas’ six-month pilot run to let the public know the “exact data on the safety, viability, and the effects on road traffic of motorcycle taxis.”

“We are hoping that they will not wait for us to write a Freedom of Information request before making the material public,” TPF Convenor Primo Morillo said in a statement on Tuesday.

Morillo said they will conduct a survey asking motorcycle taxi passengers about their experience during the Angkas pilot run.