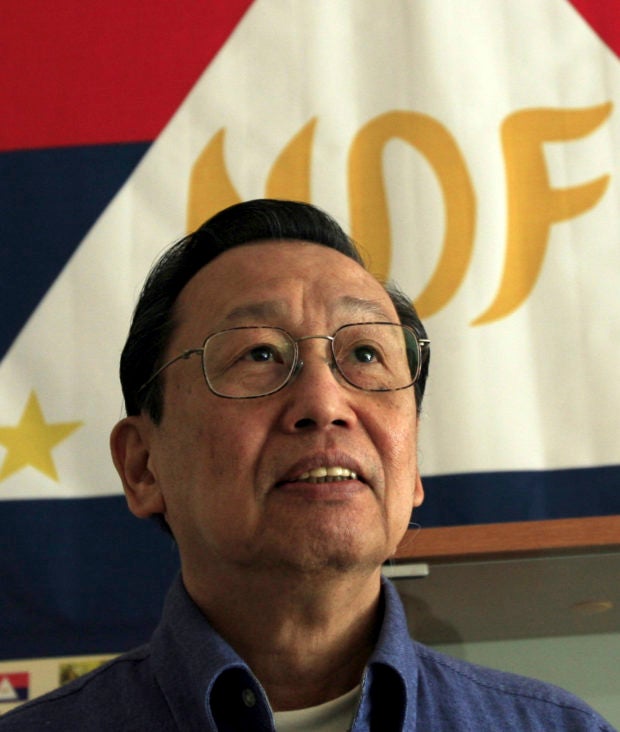 The exiled founder of the Communist Party of the Philippines (CPP) on Monday said President Rodrigo Duterte’s renewed interest to reopen peace talks with the communists could lead to the resumption of formal negotiations between them and the government.

In a statement from Utrecht, the Netherlands, where he is based, Jose Maria Sison said he was pleased that the President “has also acknowledged that he is ”˜running out of time’ and that he is determined to achieve peace before the end of his term.”

The peace talks are aimed at ending the five-decade war between the government and the rebels, which has cost many lives on both sides, displaced communities, destroyed property and weighed down the economy.

The negotiations began in 1986 between the administration of President Corazon Aquino and the National Democratic Front of the Philippines (NDFP), the political arm of the CPP, and have since then been scuttled and reopened a number of times.

Sison, 80, an NDFP consultant, said discussions could restart at a formal meeting to “reaffirm the agreements that have been forged since 1992, to overcome the presidential issuances and other obstacles that have prevented peace negotiations since 2017, to set the agenda and schedule for these negotiations, and to fulfill political, legal and security requirements.”

On Saturday, he said the government precondition that the negotiation be held in the country was “totally unacceptable.”

Speaking via Skype in a televised interview on Sunday, Sison said it would be good to adopt certain goodwill measures to reestablish rapport between the rebel camp and the state, such as holding the talks in a neutral country and doing away with the government’s repressive measures.

Other measures include “reciprocal unilateral ceasefires and the release of political prisoners who are elderly and sickly on humanitarian grounds, especially those who shall participate in the peace negotiations,”he said in his statement.

By engaging the government anew in peacemaking efforts, the NDFP is in fact doing [Duterte] a favor, he said.

“He is now entering his lame-duck years and these are the years when people would hold him accountable,”Sison said.

When he was still running for President in 2016, Duterte promised to end the conflict between the government and the New People’s Army (NPA), the armed wing of the CPP.

“But for reasons only he can understand,”Sison said, “he stopped the peace negotiations a number of times (in the last three years).”

The President has accused the CPP of having had a hand in several acts of terrorism. The group denies the allegations.

This was not the first time Duterte floated the idea of resuming peace talks since formally terminating them in 2017.

Sison believed that the President “may be conscious to leave a legacy as he finishes his term.”

“He is running out of time and he would like to have a final bid at the peace negotiations… I think the only clear goal is to leave a legacy,”Sison said.

Duterte has described his order to Bello to meet with the NDFP as his “last card”in achieving peace because his “time is running out.”

Sison said he had been in constant touch via telephone with Bello, but did not know whether the secretary would head to the Netherlands.

Once the talks resume, he said, both panels could continue the negotiations on the Interim Peace Agreement (IPA), with its three components pertaining to coordinated unilateral ceasefires, general amnesty and release of all political prisoners; and the sections of the Comprehensive Agreement on Social and Economic Reforms (Caser) on agrarian reform and rural development and national Industrialization and economic development.

He said the signing of the IPA would contribute to the success of the talks and add to mutual confidence-building measures.

Sison predicted that all the remaining sections of the Caser could be negotiated, completed and mutually approved by both panels in a relatively short time.

“Thereafter, the Comprehensive Agreements on Political and Constitutional Reforms and the End of Hostilities and Disposition of Forces shall be negotiated, completed and mutually approved.”

Christian leaders have expressed support for the revival of the negotiations.

“We are glad that peace still has a place in the President’s heart and we are happy for that,”Bishop Felixberto Calang, an Iglesia Filipina Independiente leader and convener of the Sowing the Seeds of Peace in Mindanao, said on Monday.

But Calang said it should be Duterte who should call the shots.

“ [The peace talks are] a political matter that must be decided by the civilian authority,” Calang said.

In a statement posted on social media on Monday, the Philippine Ecumenical Peace Platform (Pepp) said it would support “peace that is not won by the barrel of a gun, nor by demonizing the enemy, but through constructive action and dialogue.”

“(It should be won) through the pursuit of a peace agreement that is mutually acceptable and will address the root causes of the longest-running armed conflict in Asia to date,”said the statement signed by Archbishop Antonio Ledesma and Right Rev. Rex Reyes Jr., Pepp cochairs; Bishop Noel Pantoja, national president of the Philippine Council of Evangelical Churches; and others.

On Sunday, the human rights group Karapatan said that while it welcomed the move of the administration to revive the talks, it remained wary of the continuing crackdown on dissidents.

Of the 629 political prisoners in the country as of November, 382 were arrested under the Duterte administration, according to Karapatan.