Week after ‘Tisoy’: Bicol folk pick up the pieces 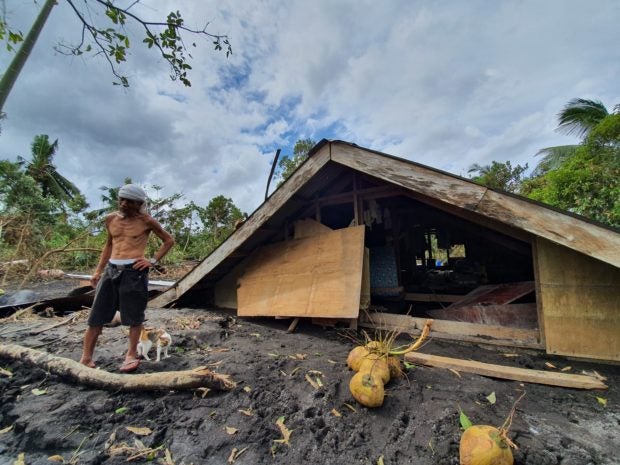 HOMELESS Only the roof of Higeno Nieva’s house is left after lahar from the slopes of Mayon volcano buried a section of a community at Barangay San Francisco in Guinobatan, Albay, during heavy rain last week. –REY ANTHONY OSTRIA

GUINOBATAN, Albay, Philippines — A week after Typhoon “Tisoy” (international name: Kammuri) hit Bicol region, residents in the provinces of Sorsogon and Albay are still stuck living in evacuation centers after the typhoon destroyed their homes.

In the region, 53,885 residents were still displaced as of Saturday, according to the Office of Civil Defense.

Damage to agriculture and fisheries in Bicol reached P1.9 billion while damage to roads, bridges, schools and flood control facilities was pegged at P2 billion.

But in Albay alone, reports from the Albay Public Safety Emergency and Management Office pegged the infrastructure and agriculture damage at P4.9 billion.

“They might still live in evacuation centers for a while. Their houses had been washed out,”Arnol Lista, municipal disaster risk reduction and management (MDRRM) officer, said on Monday.In this town, 25 families in Barangay San Francisco and 12 families in Barangay Travesia were affected by lahar that flowed down from Mt. Mayon, according to Teresita Alcantara III, MDRRM officer here.

Higeno Nieva, 66, said he was not able to save any of his belongings during the typhoon. The only part of his house visible after the typhoon was its roof.

Guinobatan Mayor Ann Ongjoco said they would relocate residents in Zone 5. She said they were still waiting for contractors who could help the affected families in restoration work.

She said they were waiting for the national government to allocate funds to build a dike in Barangay San Francisco.
Residents in nearby Daraga town are experiencing water scarcity, according to Mayor Victor Perete. The main water source at Barangay Budiao was damaged by Tisoy.

The water sanitation team of the provincial health office and the Red Cross Albay distributed potable water in the towns of Pio Duran, Jovellar, Libon, Tiwi, Malilipot and Daraga.

“No water plus no electricity; life is very hard. We hope services will be restored very soon,”said Lydia Magdaong, 52, a resident of Barangay Bañag.

Albay has lost power since the onslaught of Tisoy last week. Power is expected to be restored to the region before Christmas, but supply was back in some areas in Camarines Sur, including Naga City, and Masbate City in Masbate province.

The National Grid Corp. of the Philippines (NGCP) on Saturday turned over to Albay 1,000 food packs and 2,000 shirts to villagers affected by Tisoy, said Nilda Somera, NGCP Bicol spokesperson.

In Northern Samar, electricity has been restored in some parts of the province but full restoration would be done before Christmas.

Hector Tabilisma, Northern Samar Electric Cooperative acting general manager, said the NGCP tried to reenergize the entire province but “all tests failed” because of defects in the transmission lines.

“The restoration of our electricity [supply] will depend on the restabilization of NGCP lines,”he said.