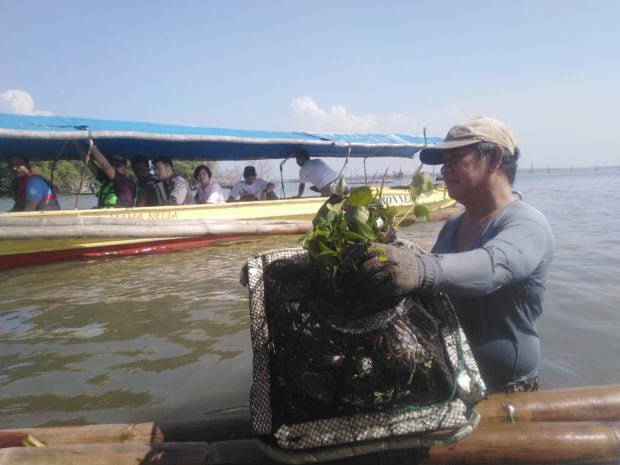 SEA BOUNTY A fisherman in the community of Taliptip in Bulakan town, Bulacan, checks his crab trap, hoping to sell his catch in the local market so he can buy food for his family. –CARMELA REYES-ESTROPE

BULAKAN, Bulacan, Philippines — Living off the sea has not been easy for the fishing community of Barangay Taliptip here.

From more than a hundred families in Taliptip’s island “sitio”(subvillage) of Pariahan, about 40 opted to stay even after several typhoons devastated the area in the last decade.

“We’ve been suffering from from high tide even before those typhoons. The typhoons raised waters so high only the roofs of the parish church and the school are visible today,”said Mercenario Tablante, 40, a fourth generation member of a family of fishermen.

Because of the island’s predicament, many assume it would be easy for them to abandon their old lives and move to new homes when a developer begins building the P735-billion New Manila International Airport in this town.

Ramon Ang, president and chief executive officer of San Miguel Corp. (SMC), which is bankrolling the new airport, said the firm was ready to move these families to safer ground.

Taliptip residents are composed of fishing clans and families of caretakers hired to manage private fishponds, which are now idle.

Representatives of the 200 families who will be displaced by the project said SMC had yet to finalize details on their relocation.

But the fishermen said they were uncertain about moving away from a much simpler life of cool and clean air, fresh catch, and no obligation to pay monthly utility bills.

Potable water is pumped from the ground, and for the past three years most of the islanders have been relying on solar batteries in charging their mobile phones or watching television, said Benedicta Espiritu, a Taliptip resident.

Households had solar batteries installed for P3,000 because it was a cheaper investment than conventional batteries, which needed to be recharged at the village center for which they spent on gasoline for their motorized fishing boats.

“Here, we are content with coffee and sugar and rice, which we buy. The rest is free,”Espiritu said.

“What we will miss the most is the camaraderie and friendship we developed as a fishing community. We wake up each morning to the sight of the sea. When we have no meals, we have neighbors who can feed us. If we lose our homes, they take us in,”Tablante said.

For 63-year-old Capol resident, Anastacia Velasco, moving away meant missing the community’s annual May 15 feast, which is celebrated with banca races.

Rosalinda Tallara, 45, said she was not ready to leave the village. A native of Gerona town, Tarlac province, she has been living at Capol for 25 years after marrying a local fisherman.

Tallara said her children went to school at the village center and would not want their classes to be disrupted.
Espiritu said residents who finished some form of education might be ready to be uprooted from Taliptip, “but many of us did not finish elementary school.”

Monica Anastacio, 63, who comes from a family of fishermen who has thrived for 60 years at Sitio Kinse near the Manila Bay, said: “We search the shores for shrimps and crabs. Yesterday, we sold P2,000 worth of seafood at the market in Obando town.”

But the danger of storms is real and most of the families accept that relocating will put their children away from harm.

When Typhoon “Tisoy” (international name: Kammuri) blew through the province on Dec. 3, Anastacio said the barangay captain of Taliptip evacuated the children.

But should they be moved, Anastacio asked that they be given another fishing area. Many of the families were advised to submit their names to the Technical Education and Skills Development Authority for training so they could be hired once the airport project starts construction.