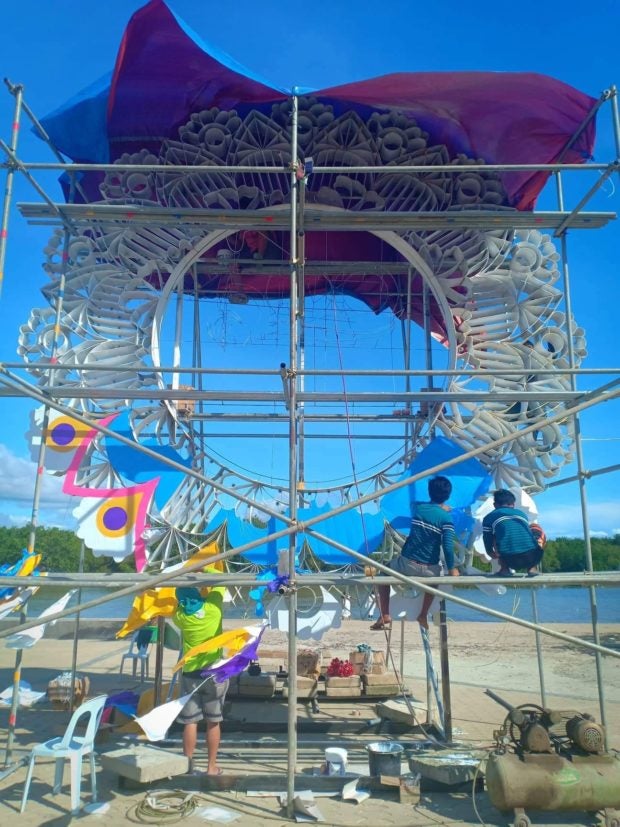 A 12-man team of craftsmen from Pampanga is building this giant lantern for the countdown on Dec. 14 to the 500th anniversary of the Battle of Mactan in Cebu province. TONETTE OREJAS

CITY OF SAN FERNANDO—The reenactment of a 500-year-old historical event in Mactan City, Cebu province would be lit by a modern day lantern being built by a team of 12 craftsmen from this city in Pampanga province.

The team is building a giant lantern to be lit on Friday, Dec. 13, when Mactan starts the countdown to the 500th anniversary in 2021 of the Victory of Mactan, the defeat in the hands of Filipino chieftain Lapu-Lapu of a team of conquistadors led by Portuguese explorer Ferdinand Magellan.

The lantern, which is 20 feet in diameter and fitted with 800 bulbs, is being put together at the shrine of Lapu-Lapu in time for the 500th year of the Battle of Mactan which took place on April 27, 1521.

President Rodrigo Duterte, who had in his 2016 campaign ranted against the denigration of Lapu-Lapu as the name of a fish, issued Executive Order No. 55 forming the National Quincentennial Committee tasked with preparing for the commemoration in Mactan.

Designed by Eric Quiwa, the lantern features floral designs with an image of Lapu-Lapu at the center.

In place of the locally invented lighting system called rotor, the lantern at the Lapu-Lapu Shrine will illuminate a set of patterns with the help of a computer, Quiwa told the Inquirer in a phone interview.

Quiwa, 47, who is a fifth-generation lantern maker, did not take part in the Giant Lantern Festival this Dec. 14 in this city to focus on the Lapu-Lapu piece, which was commissioned by the National Historical Commission of the Philippines.

His great-great-grandfather Francisco Estanislao had been recognized as the pioneer in the art of giant lanter- making that reportedly began in 1909 as part of religious processions for Christmas dawn Mass.

Back on the throne