PARIS  – France braced for even worse transportation woes when the new work week begins Monday due to nationwide strikes over the government’s redesign of the national retirement system. French President Emmanuel Macron convened top officials to strategize for the high-stakes week ahead. 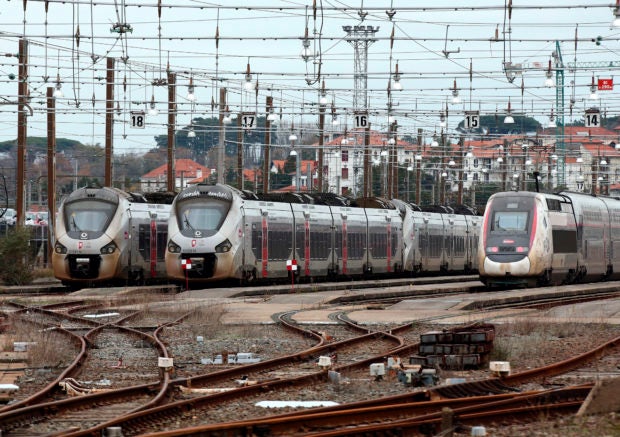 Trains park at the Hendaye train station, southwestern France, Sunday Dec.8, 2019 on the fourth day of nationwide strikes that disrupted weekend travel around France. France’s prime minister is holding special meetings Sunday about the government’s divisive redesign of the national retirement system, amid warnings that strike-related transport troubles will get even worse in the coming days. (AP Photo/Bob Edme)

Sunday saw more travel chaos as the strikes entered their fourth day, with most French trains at a standstill. Fourteen of Paris’ subway lines were closed, with only two lines — using automated trains with no drivers — functioning. International train routes also suffered disruptions.

Monday will be an even bigger test of the strike movement’s strength and of commuters’ and tourists’ patience. Unions are calling for more people to join the strike Monday. Many employees worked from home or took a day off when the strikes began last week, but that’s not sustainable if the strikes drag on.

Warning of safety risks, the SNCF national train network and the Paris transit authority RATP warned travelers to stay away from train stations Monday instead of packing platforms for the few trains still running.

“On Dec. 9, stay home or find another means of locomotion,” SNCF warned travelers.

Macron, a centrist former investment banker, argues that the retirement overhaul will make a convoluted, out-dated pension system more fair and financially sustainable, uniting 42 different plans into one. The government says it won’t change the official retirement age of 62, but the new plan is expected to include financial conditions to encourage people to work longer as lifespans lengthen.

Unions see the reforms as an attack on worker rights and fear that people will have to work longer for smaller pensions. Some French workers can now retire in their 50s.

New nationwide protests are scheduled Tuesday and the prime minister will release details of the new retirement plan on Wednesday.

Yellow vest activists joined the protests Saturday, adding retirement reform to their list of economic grievances in protests around the country. Police fired tear gas on rowdy protesters at largely peaceful marches through Paris and the western city of Nantes.