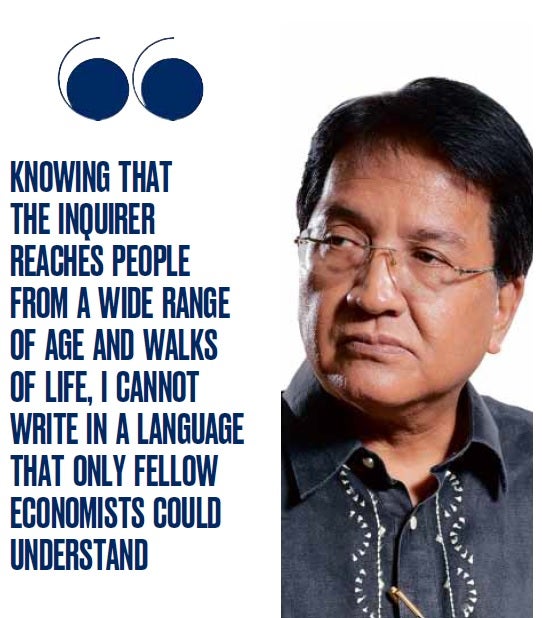 When I first started writing my “No Free Lunch” column nearly 18 years ago for the Business section of another paper, my audience probably numbered only in the tens of thousands (based on that paper’s circulation data then).

At the time, my memories of the eight-year “sentence” I served in government—six of them as President Fidel V. Ramos’ socioeconomic planning secretary heading the National Economic and Development Authority—were still fresh in my mind. I saw the column as an excellent opportunity to put on record, and share, my valuable learnings in public service.

I had also just begun a second academic career as an Economics professor at the Ateneo de Manila University, having taught the same subject for 15 years at the University of the Philippines Los Baños (UPLB), which I headed when invited to join government in 1990.

With “No Free Lunch” just over a year old, the Inquirer invited me to move over to its own Business section, and the venerable Jose “Ping” Galang, my former editor and friend, graciously let me go. Well aware that the Inquirer had the widest circulation and readership in the country then and now, he fully understood. It was, after all, an opportunity to reach a far wider audience, something no writer would want to pass up.

“You’ll see the difference when your reader mail pours in,” a columnist friend from another widely read paper alerted me.

Even before the move, my self-appointed mission had been to help widen public understanding of economic issues confronting the country, that being the area of my own expertise and experience. I considered it a challenge that economists are often seen as being unable to make themselves understood by the average reader, or worse, are often wrongly thought to espouse policies that are antipeople and antipoor.

As a long-time teacher of an introductory economics course in Ateneo and at UPLB, I found that the challenge was the same in the classroom as it was in print. The Inquirer’s much wider readership made it an even more daunting challenge. For years, I had been telling my students in basic economics that if they came out of the course being able to understand and appreciate the Business section of a newspaper, I would have fulfilled my mission.

It was thus an affirmation that “No Free Lunch” merited a Special Citation for Outstanding Business Column from the Catholic Mass Media Awards in 2008.

But even more affirming are the positive feedback from countless readers, many of whom say that they actually clip my columns. Others, meanwhile, tell me that their Economics teachers have made my column required reading.

Such is the discipline that writing for the Inquirer entails. Knowing that the paper reaches people from a wide range of ages and walks of life, I cannot write in a language only fellow economists would understand. Someone once told me about the “grandmother test”: you could consider a piece well written only if your grandmother could read it.

For people steeped in a particular technical discipline, that is never easy. The challenge became even more acute when the Inquirer editors decided to shift “No Free Lunch” to the main Op-Ed section of the paper in 2010, after seven years as a business and economics column. The move to the Opinion section meant reaching a whole new set of readers, far beyond those who even bother to open the paper’s Business section.

But yet another challenge was to come when the Inquirer changed its format in October 2016, and Op-Ed columnists were asked to reduce the length of their articles by about 200 words. Amid mild resistance from a few fellow columnists, I remembered the old saying, “If I only had more time, I would have made it shorter.”

I see the wisdom in how the Inquirer editors chose, in this age of short attention span and 160-character Tweets, to ensure that Op-Ed pieces will henceforth be no more than a “3-minute read.”

Thanks to them, and in keeping with the times, we Inquirer writers have come to reach a point when we embrace the rare art of saying more by saying less.

Read Next
Looking back at 3 decades of ‘Looking Back’
EDITORS' PICK
How to lose a PH genius: Wesley So officially a US citizen
Every Filipino home can now be a smart home with realme TechLife
LTO’s P500-M deal for screws draws scrutiny
Nestlé Philippines’ ‘NESCAFÉ Plan’ bags Grand Anvil at PRSP 56th Anvil Awards
New 3,045 COVID-19 cases push PH total active cases to 40,074
Smart reinforces superiority with best speed and mobile video experience in PH
MOST READ
How to lose a Filipino genius: Wesley So officially a US citizen
Robredo on Sara Duterte leading poll surveys: Why are Filipinos drawn to leadership of this kind?
LTO’s P500-M deal for screws draws scrutiny
US lays out list of aid to ‘satisfy’ Duterte following VFA payment demand
Don't miss out on the latest news and information.