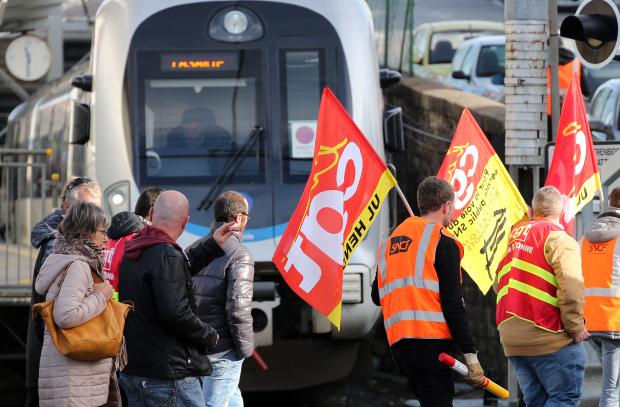 Rail workers of CGT union demonstrate in Hendaye, southwestern France, Friday, Dec. 6, 2019. Frustrated travelers are meeting transportation chaos around France for a second day, as unions dig in for what they hope is a protracted strike against government plans to redesign the national retirement system. (Photo by Bob Edme / AP)

PARIS — Strikes disrupted weekend travel around France Saturday as truckers blocked highways and most trains remained at a standstill because of worker anger at President Emmanuel Macron’s policies.

Tourists and shoppers faced shuttered subway lines around Paris and near-empty train stations as a mass movement against the government’s plan to redesign the national retirement system entered a third day.

Other groups are joining the fray, too.

Truckers striking over a fuel tax hike disrupted traffic on highways from Provence in the southeast to Normandy in the northwest.

Meanwhile, yellow vest protesters are planning their weekly demonstrations over economic injustice Saturday.
The travel chaos is not deterring the government. Prime Minister Edouard Philippe plainly told the French in a nationwide address Friday: “You’re going to have to work longer.”

He will present details of the plan next week. The government says it won’t raise the official retirement age of 62 but the plan is expected to encourage people to work longer. Philippe did offer one olive branch, saying the changes would be progressive so that they don’t become “brutal.”

Macron says the reform, which will streamline a convoluted system of 42 special pension plans, will make the system more fair and financially sustainable.

Unions see the plan as a threat to hard-fought workers’rights, and are digging in for what they hope is a protracted strike. They also plan new nationwide retirement protests Tuesday.