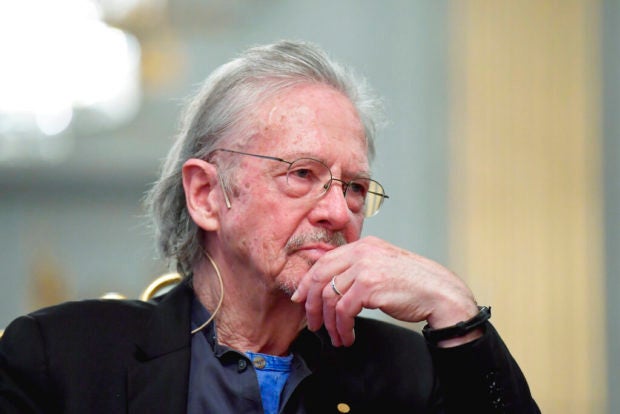 STOCKHOLM — Nobel Literature Prize laureate Peter Handke has lashed out against journalists asking about his views on the wars in former Yugoslavia.

Handke has been widely criticized as an apologist for Serbian war crimes during the conflict in Bosnia-Herzegovina.

In a news conference Friday ahead of next week’s prize award ceremony, Handke bristled at questions about his writings on the wars in former Yugoslavia.

He concluded the testy meeting by saying that after the prize was announced, he had received a letter filled with soiled toilet paper “and I tell you … I prefer toilet paper, the anonymous letter with toilet paper, to your empty and ignorant questions.”

The choice of the Austrian novelist as this year’s winner of the prestigious award prompted substantial criticism over his defense of Serbs’ actions during the wars and for his speaking at the 2006 funeral of former Serbian leader Slobodan Milosevic, who died while facing trial for war crimes.

Protests are planned in the Swedish capital on Tuesday, the day the 9-million-kronor ($948,000) prize is presented. Handke fended off a question at the news conference about what he could say to the protesters.

“Tell me — perhaps I need your advice,” he parried.

The award also has roiled the Swedish Academy, which chooses the laureate from nominees selected by a committee. Academy member Peter Englund on Friday said he would boycott this year’s Nobel ceremonies in protest of Handke’s selection. A member of the nominating committee, Gun-Britt Sundstrom, earlier announced her resignation in protest.

The Swedish Academy is still trying to recover from a sex scandal that caused the awarding of the 2018 literature prize to be postponed until this year.

The 2018 winner, Olga Tokarczuk of Poland, has irked conservative forces in her homeland.

Five things to know about the Nobel prizes