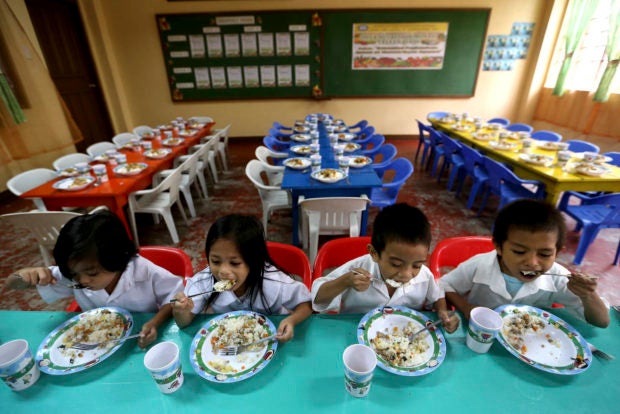 MANILA, Philippines — Health Secretary Francisco Duque III pointed out that the poor nutrition of Filipino children may have contributed to why the country ranked worst among 79 countries in reading literacy and second lowest in both mathematical and scientific literacy.

“From the start, it is important for parents to properly take care of their child’s health. Because once the brain is undeveloped or poorly developed, what results is poor performance in reading, math, science and all other education metrics,” Duque told reporters.

On Tuesday, results from the Organization for Economic Cooperation and Development’s Program for International Student Assessment (Pisa) showed that Filipinos fared worst among 79 countries in reading literacy.

For mathematical and scientific literacy, the only country that the Philippines bested was Dominican Republic.

In the recent State of the World’s Children Report released by the United Nations Children’s Fund (Unicef), it noted that kids today are consuming more food that are low in essential nutrients due to the accessibility and affordability of processed food.

As a result, Unicef said that in the Philippines, one in three kids below 5 years old were stunted, or too short for their age.

Unicef nutrition specialist Rene Galera said that because of undernourishment, children suffer from long-term developmental delays which have implications as they grow into adulthood.

These include performing poorly in school and getting sick often which burdens the public health system.

Duque said that the Pisa results served as a wakeup call for them to “seriously implement” the provisions of the recently signed Republic Act No. 11148, or “Kalusugan at Nutrisyon ng Magnanay Act.”

The law provides interventions to address malnutrition among the most nutritionally at risk, prioritizing women of reproductive age, especially adolescent girls, teenage mothers, pregnant and lactating women and children from birth up to 24 months.

Quezon City Rep. Precious Hipolito Castelo, for her part, on Friday called for a House inquiry into the abysmal showing of Filipino students in reading, math and science, while two other representatives proposed alternative learning modes that might boost academic performance.

Castelo said she wasn’t seeking a congressional probe to pin the blame on anyone, but wished instead to find solutions to the problem.

“To address the reading problem, I suggest that after Grade 3, for pupils with significant reading comprehension difficulties, there be a special Alternative Learning System intervention curriculum run by the [Department of Education]’s Education for Learners with Special Needs Office,” she said.

Kabayan Rwep. Ron Salo said he would support two pending bills aimed at reducing the load on public school teachers and establishing a “health and safety office” in each school.