BEIJING — Looking at page after page of childhood photos, Xiaogunzhu was drawn to an image of a French-Irish boy with smiling dark blue eyes.

But she was not admiring her lover’s family album, she was browsing a catalog of potential sperm donors – the 39-year-old is one of an increasing number of affluent single women in China that are seeking a child, but not a husband. 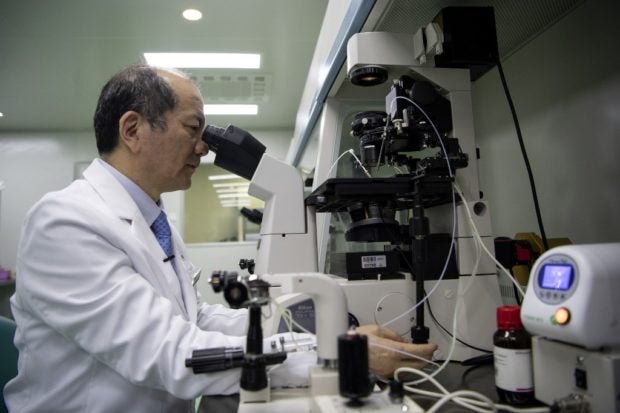 This photo taken on November 18, 2019, shows doctor Liu Jiaen, director of a fertility hospital, looking at a sperm sample through a microscope at the hospital in Beijing. – China’s national health department stipulates that the purpose of sperm banks is for “treating infertility and preventing genetic diseases”, so in practice, that prohibits non-married women from using them. (Photo by NOEL CELIS / AFP) / TO GO WITH Society-marriage-China-family,FEATURE by Sijia Li and Helen Roxburgh

Her choice made – donor #14471 on the website of a Californian sperm bank – Xiaogunzhu flew to the US to begin the first rounds of treatment.

“There are many women who won’t get married, so they might not fulfill this fundamental biological mission,” Xiaogunzhu told AFP, using the name she blogs under to avoid any negative attention.

“But I felt another path had opened up,” she added.

Her baby, now nine months old, is called Oscar after a character in a comic about the French revolution – a nod to the donor’s French ancestry.

The marriage rate in China has been in decline over the last five years. Last year, only 7.2 out of 1,000 people got married, according to official statistics.

But many feel that struggling to find or simply not wanting a partner should not preclude them from motherhood.

Xiaogunzhu believes a father isn’t necessary – her own was controlling and often angry, dimming her view of the traditional family set-up.

“Why does everyone think that children will ask: ‘why don’t I have a father?'” she said.

Analysts predict that the total market in China for fertility services will reach $1.5 billion in 2022 – more than double its 2016 value.

But demand for services overseas for Chinese nationals is also booming.

But the journey is neither cheap nor easy.

China’s national health department stipulates that the purpose of sperm banks is for “treating infertility and preventing genetic diseases”.

In practice, that prohibits non-married women from using them.

“We want to help these single women, but unfortunately we truly are politically restricted,” said Liu Jiaen, the director of a fertility hospital in Beijing.

Liu said the limitation is “a pity”.

Women also face discrimination; in Chinese culture, marriage is still considered essential to having a child.

“If sperm banks and related technology like egg-freezing are accessible to single women, it’s a way to safeguard your own reproduction ability,” said Alan Zhang, a 28-year-old reproductive rights activist in Beijing.

Zhang has written more than 60 letters to delegates of China’s parliamentary body asking them to overturn the restriction as part of her work with Diversity Family, the NGO she co-founded to advocate for non-traditional family structures.

“The state does not do this, so the people can only find their own way,” said Zhang.

“If you choose to use a sperm donor, sperm is essentially a commodity,” said Carrie, a 35-year-old single mother living in southwest China who also requested anonymity.

Carrie said that international sperm banks are more sophisticated than Chinese ones, and “able to meet consumer demand”.

Reeslev said one possible reason is that sperm banks outside of China have fewer Chinese donors – Cryos has only nine donors out of 900 who identify as Chinese.

US sperm bank California Cryobank has 70 available donors out of 500 who self-identify as Chinese.

But experts said regardless of the availability of Chinese or Chinese-American donors, women are still choosing to have mixed-race children.

Zhan Yingying, a co-founder of the Diversity Family organization, said it was rare for her to come across a mother who chose a sperm donor of Chinese ethnicity.

Traits such as double eyelids and pale skin are often valued according to Chinese beauty standards.

“Before choosing the sperm donor I had not considered a particular race,” insisted Carrie, but after seeing the catalog she realized she had a preference for foreign physical traits – and now has two half-Danish children.

For baby Oscar, Xiaogunzhu said personality was the major factor in her decision as the donor was listed as “full of joy”.

But on her Weibo blog, photos of Oscar with the hashtag #mixed-race baby draw admiration.

“I personally don’t care about the color of the skin,” she said. “I only care that the eyes are big and the features are good.”