TOKYO — A sharply dressed crowd of Japanese singletons shuffle awkwardly around conference-room tables, exchanging small-talk and CVs in an attempt to find a marriage partner – all of them accompanied by their parents.

One 38-year-old woman, who declined to give her name, said she “didn’t have the courage” to find a spouse and move away from her mother, who had come with her to the match-making party.

“I didn’t have many good opportunities to meet someone,” she explained, adding: “My workplace has lots of women but not many men.” 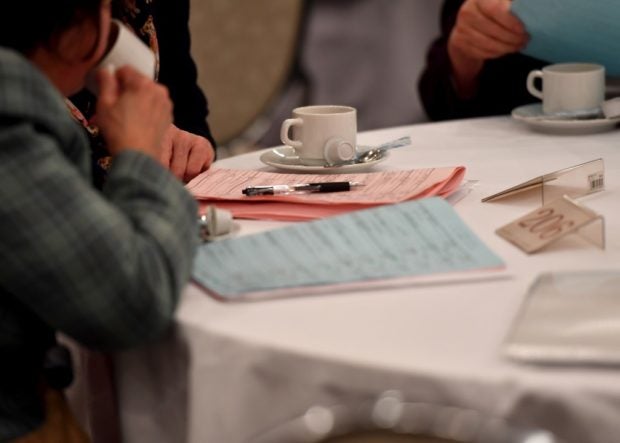 This photo taken on November 3, 2019, shows parents checking a list of participants during a match-making party in Tokyo. – Roughly a quarter of Japanese people between 20 and 49 are single, according to government data, and while people of this age routinely express a wish to get married, outdated social attitudes and increasing economic pressure is making tying the knot more and more difficult, experts say. (Photo by Toshifumi KITAMURA / AFP) / TO GO WITH Society-marriage-Japan-gender-family,FEATURE by Kyoko Hasegawa

Roughly a quarter of Japanese people between 20 and 49 are single, according to government data.

And while people of this age routinely express a wish to get married, outdated social attitudes and increasing economic pressure is making tying the knot more and more difficult, experts say.

Sociology professor Masahiro Yamada from Tokyo’s Chuo University told AFP that the norm of single people living with their parents until marriage means there is less immediate pressure to find a partner.

“They think it’s a waste of time to have a relationship with someone who does not meet their conditions” and can afford to wait for a better catch, he said, dubbing these people “parasite singles.”

Although long-term financial security with a husband or wife is seen as important, the difficulty of finding affordable housing adds to the incentive to stay with mum and dad, he said.

One 74-year-old man at the party, on the hunt for a suitable bride for his 46-year-old son, pointed to another problem: overcoming shyness.

“My son is a salesman. He’s good at dealing with customers but he is very hesitant when it comes to women,” said the father.

Why was his son not looking for himself? He was too busy with work.

The same father said his eldest daughter was married but his youngest, a doctor living in the US, is single at the age of 34.

He said he is worried for her, “as I’ve heard it is hard for female doctors to find partners”.

Shigeki Matsuda, a sociology professor at Chukyo University in central Japan, blames the country’s falling marriage rate on a phenomenon known as “hypergamy”.

“Japanese women tend to seek men with stable employment and education levels” higher than them, he explained.

Anecdotal evidence from the match-making party seemed to bear this out, a small queue of women forming to exchange contact details with one of the men who, it emerged, had the highest income of the group.

“The high ratio of unmarried men and women won’t change unless more women accept the idea of marrying a man with an income lower than her,” said Yamada.

In addition, many people meet future spouses in the office in workaholic Japan, and there are fewer opportunities as jobs become more precarious.

In the decades after World War II, Japan rebuilt its economy largely via huge corporations offering ultra-dedicated workers a job for life – but that pattern is changing rapidly and job security is declining.

Since the early 1990s, the ratio of non-permanent and contract employees has risen from around 15 percent to just below 40 percent, according to labor ministry statistics.

“Lower levels of income and an increase in the number of extremely unstable jobs – with the fear of getting sacked at any time – are not helping people to think about getting married and having a family,” said Shuchiro Sekine, head of a trade union representing contract workers.

Even if these workers hope to find a partner with less job security and lower-income comes less chance of finding a spouse.

Six out of 10 men, aged between 30-34 with a classic “salaryman” job, were married as of 2017, according to a government study issued this year, whereas only 22 percent of male contract workers the same age had a wife.

Those at the Tokyo match-making party are the lucky ones, Sekine told AFP. “Those on lower incomes wouldn’t even think about attending.”

Despite these barriers, do such events help? Shoji Wakisaka, head of the association hosting the party, said there was no firm data but there had been some successes – if limited.

“About two percent of participants on average find a spouse,” Shoji said.

One single woman at the party said it was an “efficient” place to meet others who want to get married.

“You can’t exactly ask passers-by if they are married,” her mother added.

A marriage counselor at the party, Noriko Miyagoshi, implored would-be lovebirds to forget the finances and focus on Cupid’s arrow.

“You shouldn’t be making a lot of conditions,” she told participants. “I hope you choose the one you genuinely feel you’ll be able to get along with.”