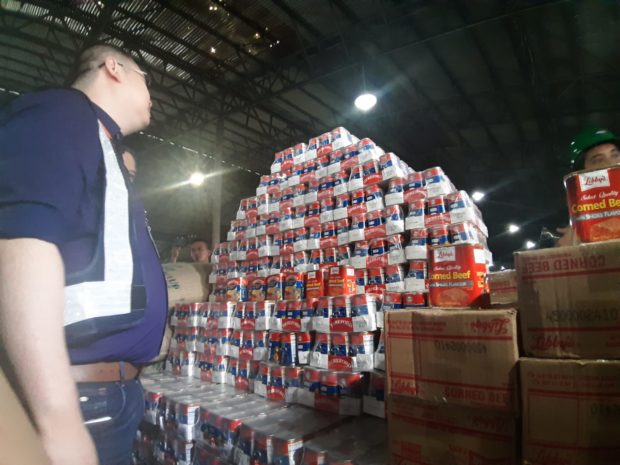 BOC Assistant Commissioner Vincent Philip Maronilla said that five containers of misdeclared food products – such as canned goods and coffee beans – and one container of used clothing (ukay-ukay products) arrived in the country from Hong Kong, South Korea, and Brazil.

Maronilla said that aside from misdeclaration of shipments, the Food and Drug Administration (FDA) confirmed the canned goods have also yet to receive accreditation from their office.

The assistant commissioner said the food products will undergo seizure proceedings while the used clothing will be disposed of accordingly as they may pose possible health hazards.

If the food products are deemed safe for consumption, Maronilla said they may be auctioned or donated to evacuation centers especially following the onslaught of Typhoon Tisoy.

“More importantly, the lack of an FDA permit, meaning it’s critical when it comes to the manner of disposition because – let’s say for example it is a misdeclared product but it is something that can still be sold because we do not have any restriction when it comes to safety, that’s something we can auction off,” Maronilla, speaking partly in Filipino, said in a press briefing.

“If there’s some way that the FDA can guarantee the safety of these products, we can either sell it through auction or donate it to the victims of calamities,” he added.

As for the used clothing, Maronilla said there is an existing presidential decree that prohibits the importation of used clothing due to health hazards that they may pose.

“Sometimes there is an accompanying sickness that is very unique to the country of source of these used clothing. Since it is not vetted here, they cannot be easily seen,” Maronilla said.

Maronilla also debunked “misconceptions” that germs in used clothing can be killed by simply placing the clothing in boiling water.

“In fact, there are certain biological hazards and biological weapons that are sometimes put in used clothing for terrorism purposes,” the BOC official said.

“During our briefing with anti-terrorism councils, these social goods that are usually intended for the masses sometimes are targets if they want to,” he added.

Maronilla said used clothing will be disposed of accordingly.

BOC said the shipments violated Sections 1400, and 1113 of the Customs Modernization and Tariff Act; RA 3720 or the Food, Drug, and Cosmetic Act; and RA 4653, which prohibits commercial importation of used clothing or rags to safeguard people’s health and the nation’s dignity.

Maronilla then said consignees of the items have yet to send a representation to their office. The consignees and the brokers involved are immediately suspended once they are subjected to proceedings, he added.

When the forfeiture proceeding ends, a recommendation for the revocation of the consignees’ permits “usually” happens, he added.