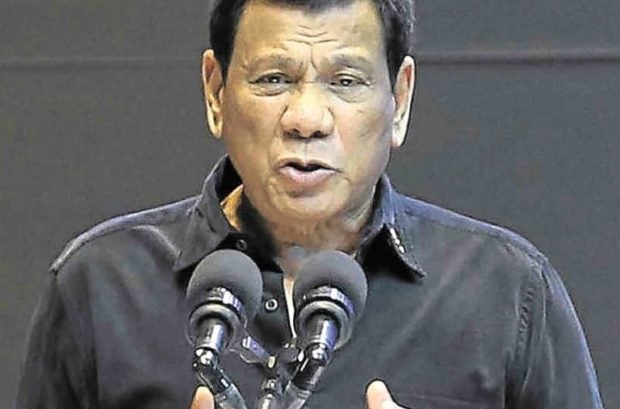 MANILA, Philippines—President Rodrigo Duterte will not pay the P7.39-billion compensation the government was required to pay Manila Water Co. over a recent decision of the Singapore arbitration court.

The Permanent Court of Arbitration in Singapore earlier ordered the Philippine government to pay the Ayala family-owned Manila Water P7.39 billion to compensate it for losses suffered between June 2015 to November 2019 for the non-implementation of water rate hikes.

Last year, the government was also ordered to pay the Manny Pangilinan-led Maynilad P3.4 billion by the same Singaporean court due to the Philippines’ refusal to allow it to increase prices from 2013 to 2017.

According to Duterte, owners of the two biggest water utilities in the country milked billions from the government and the people over their disadvantageous water contracts with the state.

Maynilad and Manila Water distribute water in Metro Manila and nearby provinces under agreements signed with the Metropolitan Waterworks and Sewerage System (MWSS) during the Ramos administration in 1997.

But a Department of Justice (DOJ) review found out that a dozen of “onerous” provisions were stipulated in the deals.

The President vowed to go after those behind the contracts, including the powerful businessmen behind the two firms, whom he accused of “economic plunder.”

“This is a classic case of economic plunder. Wala lang nakasilip nito [No one was able to look into this],” he said.

Earlier, Duterte’s spokesman and legal counsel Salvador Panelo said the government is not inclined to pay billions of pesos to the two water concessionaires despite the order from the Singapore-based arbitration court.

Both Manila Water and Maynilad have already expressed openness to sit down with the government and find a “workable solution” on the arbitral award.

But according to Justice Secretary Menardo Guevarra, Duterte is not interested to settle the arbitral award.

“The President is not interested to talk about any settlement of the arbitral award. What he wants is a new deal altogether, so that this situation will not arise again in the future,” Guevarra told reporters in a text message.

Read Next
Duterte: PH ‘surrendered everything’ in ‘onerous’ water concession deals
EDITORS' PICK
Work-From-Home is here to stay and requires reliable logistics
Legarda emphasizes role of ICC/IPs in nation building this IP month
The crisis within: Suicides rise as COVID takes its toll on lives, livelihood
DOTr to defend proposal to increase passenger capacity in public transport
Pharmally scandal: When middlemen profit even during a pandemic
USAID Opportunity 2.0 calls for applicants for grants for out-of-school youth engagement
MOST READ
Bongbong says PH should modernize infrastructure to become Asia’s next logistics hub
PDP-Laban’s Cusi wing inks coalition deal with Reform Party
Martires asks why he is being singled out over issues on releasing SALNs
Pharmally scandal: When middlemen profit even during a pandemic
Don't miss out on the latest news and information.